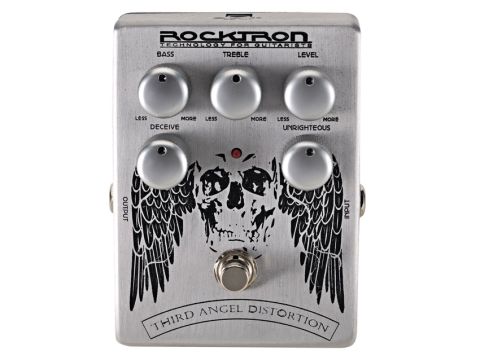 A decent, well-made distortion pedal, but it just doesn't blow us away like we'd like it to.

You're probably more familiar with Rocktron's rack-mounted effects and switching systems, but its catalogue also contains a comprehensive range of stompboxes, including the Third Angel Distortion.

In the unlikely event that the styling left you guessing, we can confirm that this pedal is aimed squarely at hard rock and metal players who want plenty of gain from a high-class distortion pedal.

There are five controls: Level, Bass and Treble, and the unconventionally titled Deceive (read 'gain') and Unrighteous. That mysterious Unrighteous knob, says Rocktron, "controls the distortion waveform symmetry and definition". Think of it as a scoop control that can take you from a fat chunky tone, through to a Dimebag-esque razor sound.

Add to this the two-band EQ and bucket-loads of gain on offer, and it looks like the Rocktron's onto a winner.

Thing is, the Third Angel left us content but not quite bowled over. It also has a tendency to squeal when the gain and level knobs are set high, so you may want to consider a separate noise gate onstage.

If you're in the market for a modern distortion workhorse, the Third Angel is worth a look. It's well made, sounds great and has enough features to shape your sound - it just doesn't grab you by the wallet and drag you to the till.