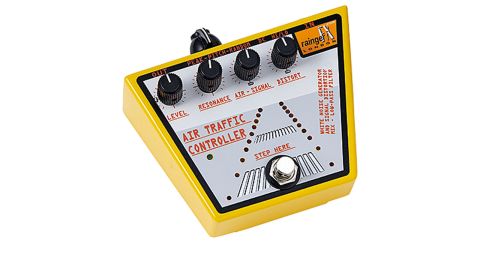 An engaging new take on the 'synth' pedal.

The Air Traffic Controller from London's Rainger FX gets its name from the idea that it can produce "airy whisps of sound", and while that's pretty descriptive of some of its sounds it's probably best to get technical to explain what it does.

Basically, you get a distortion circuit whose sound can be blended with a white noise generator (for hiss), with the whole lot then going through a low pass filter with a cut-off frequency that can be controlled by dynamics, note pitch or, if you want to confound your audience, just randomly.

With the resonance turned down, you get almost conventional fuzz/distortion with a noise-gate, but turning up the resonance brings in varying degrees of filter to add a synthy blend to your notes.

While the white noise (brought in with the air knob) isn't pitched, it will follow guitar dynamics, adding a layer to the sound. An intriguing pedal. It won't be for everybody, but its bold sounds might tempt noise merchants.