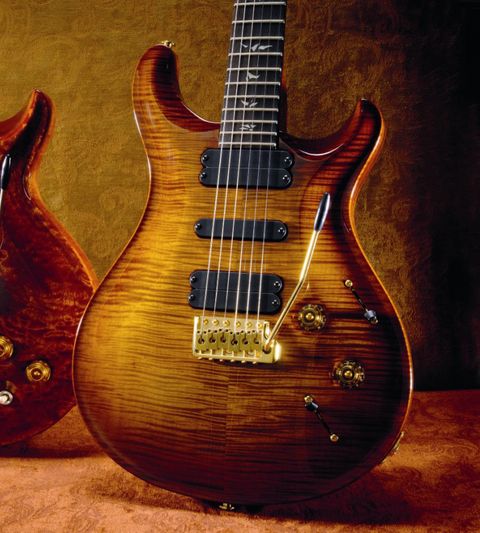 The good news is that you´ll probably see a standard 513 (without our review model´s cost-hiking 10-top and gold hardware) with a street price closer to £2,600. Still considerable but if you genuinely need a ‘Swiss army knife´ of a guitar we strongly recommend you spend some time checking out this model. It´s hugely versatile and the single-coil voices are quite special.

Originally introduced in 2004 as the now discontinued 513 Rosewood, the 513 amounted to a virtually complete redesign of the PRS Custom. But, at well over £4000, with new pickups and electronics and Brazilian rosewood neck and fingerboard, its potential impact was severely limited.

With a base price under £3000, achieved primarily by swapping the Brazilian rosewood for a standard mahogany neck with Indian rosewood fingerboard, the new model aims to provide the same versatile sounds but at a more affordable price.

“What´s going on is if it wasn´t made before 1970, it doesn´t exist,” says Smith. “Fender and Gibson are existing, somewhat, on doing vintage original spec ‘copies´ of what they made before 1970. I wasn´t alive [in terms of guitar making] before 1970. I can´t do that. So I´ve got to push forward.”

At £2,950 full retail, the standard 513 is, aside from the special order Santana and the limited-edition West Street, the most expensive double-cut PRS in the main USA range. Oddly, bearing in mind the 513 is designed as a more affordable version of the 513 Rosewood, PRS sent us a 513 loaded with optional flame maple 10-top and gold hardware - tonally unnecessary upgrades that add £798 to the price!

But let´s not forget, the 513 is all about sounds and providing more of them. “Paul Jackson Jr is playing one on American Idol every night,” says Smith proudly. “That was what the guitar was intended to be: the swiss-army knife of our guitars with a whole bunch of sounds. Paul needs to be able to switch sounds on every single song, we couldn´t be more pleased with that.”

So, the ‘5´ refers to the five single-coil pickups designed for the guitar by PRS´s Winn Krozak - the outer two pairs are grouped like dual-coil humbuckers. The ‘13´ refers to the number of sounds and you´ll notice two lever switches. The one closest to the master volume is a five-way and selects the pickups in standard Stratocaster style: bridge, bridge and middle, middle, middle and neck, neck. The second lever switch is a three-way ‘mode´ switch that offers ‘heavy humbucking´, ‘clear humbucking´ and ‘single-coil´.

In heavy humbucking the two outer pairs are selected (the middle pickup doesn´t change, it´s always a single-coil); clear humbucking ‘taps´ the two dual coils, reducing the output for a cleaner tone. In single-coil mode the neck-facing coils of both humbuckers are selected.

Another change is the scale length that extends the standard PRS scale to 642mm (25.25-inches), adding a little more tension to the strings over the standard 635mm (25-inch) scale and adding some of the upper harmonic ‘sparkle´ associated with the longer Fender scale length of 648mm (25.5-inch).

There´s a slightly different carve to the neck that Smith describes as, “pretty much a wide-fat but 1/64th of an inch [0.4mm] narrower at the nut.” It doesn´t feel quite as different to the wide-fat profile here as on the 513 Rosewood but that could simply be down to the feel of unfinished rosewood as opposed to this High Gloss finish.

The 513´s fretwire is slighter wider than the regular PRS fretwire but not as wide as the Santana wire used on the West Street. It´s the tallest wire they use, but with quite a flat-topped profile.

Then there´s the neck joint. The body extends under the heel of the neck and ‘grabs´ the heel - a seemingly minor change but one that Paul Reed Smith believes helps to produce more low-end to try and get more of a single-cut sound from a double-cut guitar.

The 513 also advertises a compensated nut. PRS has always moved the nut slightly closer to the first fret to improve lower position intonation, and here it´s very slightly angled too - slightly closer to the first fret on the bass-side than the treble. Cosmetic changes include new bird inlays drawn by PRS´s Joe Knaggs and Marc Quigley and we even get new-design ‘lampshade´ control knobs.

Like us, you´ll probably spend some time flicking switches and finding random sounds that you like keeping your amp setting the same. That´s cool enough, but to hear what the 513 is really capable of you almost need to think of three different guitars that require three different amps.

There´s explosive twang from the bridge unit, elastic depth from the neck pickup and, bearing in mind the construction and materials of the 513, very useable funky Strat-like mixes. There´s a sparkle to the single-coil sounds that´s missing from previous attempts at getting single-coil sounds from humbuckers - by PRS included.

The middle single-coil initially seems a little lost but set up a mid-gained sound and it´s a good base to start your experimenting. Indeed the mixed sounds are some of the best, like the full humbucker neck mixed with the middle single-coil captures a powerful in-between tone that has accurate single-coil snap but with more grunt.

In single-coil mode position two and four on the five-way are dead quiet. There is some noise, obviously, from the lone single-coils but this in another area that PRS has tried to improve upon. “During the process of the 513 Rosewood we made some modification in the parts and the boards,” says Smith. “But the biggest thing we were able to do was to get the noise down by 12db on the single-coil pickups. For a single-coil that should be pretty good.”