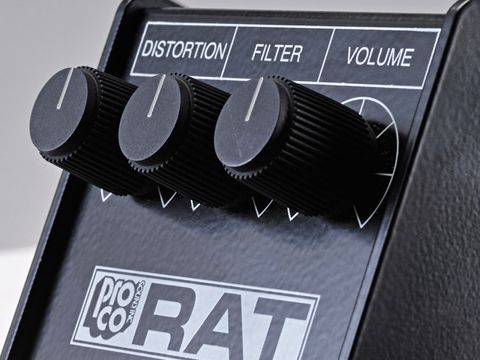 This Rat does make some great sounds, but that price tag is a lot for a pedal of this type. It's worth considering whether you really need that LM308 chip.

Pro Co founder Charlie Wicks (who sadly passed away in March) first started building the Rat in 1978 and, after a couple of incarnations, the Whiteface arrived in '85.

At the heart of the Rat's sound is the LM308 op-amp chip; it's what many collectors regard to be the key ingredient in vintage versions. This pedal is the only one in the current Pro Co range to include it.

The Rat is a basic design with Gain, Filter and Volume controls and an on/off stomp switch. With the Gain set low and Filter rolled back, you get a dark, vintage-sounding overdrive. As you boost the Gain and open the Filter, the pedal starts breaking up and the Rat's real character shows it face.

Push the Gain past two-thirds with the Filter set to max and you're into the harshest clipping territory. It's this fat, heavily broken distortion that has made the Rat an alt rock staple.

The popularity of pedals like this has taken grot-box fuzz pedals out of the junk shop and into the boutique world. If you obsess about vintage gear, you'll love the '85's faithfulness.

Equally, crank the gain and you can indulge in the same lung-filling levels of fuzz that Kurt Cobain, Graham Coxon and Frank Black made famous, too.

The only thing left to consider is the price: there's £140 difference between this and the £89 non-LM308 loaded Rat 2.