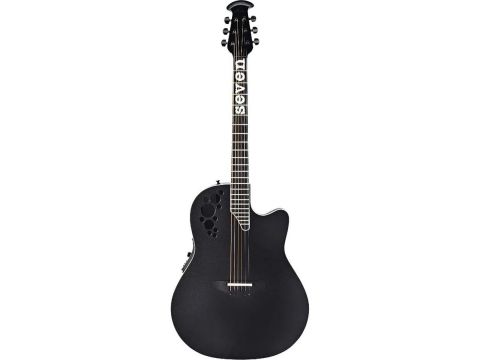 Give it a standing Ovation.

We thought we had Mick Thomson of Slipknot all worked out. Big fella. Boilersuit. Face like a medieval portcullis. And always a drop tuned electric clutched in his meaty paws.

Naturally, TG assumed it was some sort of Iowan joke when Thomson floated the idea of a signature acoustic… so imagine our surprise when the new Ovation MT37-5 rolled into the office. Unless Mortiis signs as the new face of Nivea, you're looking at the most unlikely collaboration of the year.

This is a Korean version of the Elite T, which is Ovation's entry-level US model. It has a contoured Lyrachord bowl (which is a high-spec fitment), a spruce top and a maple speed neck shaped to Mr Seven's spec.

It also has the US OP-PRO preamp, matched to Ovation's OCP-1K pickup. And it's priced within reach of the fans at £599."

Unrelentingly black, with a sinister 'seven' inlay punched into the rosewood board, the MT37-5 looks like the kind of acoustic you'd play round a campfire in hell.

Growing less sceptical by the minute, TG picked it up, and was relieved to find that the bowl has less tendency to slide from your lap than most Ovations, and that the neck is fast enough to make alternate-picked runs as feasible as open chords.

Ovations have been divisive since the first one launched in 1967, for the simple reason that the Lyrachord bowl offers a more biting, toppy tone than wood.

It's business as usual with the MT37-5. Push through a chord and you'll get serious definition and volume, but it's at the expense of the organic warmth you'd expect from a 'normal' mahogany-backed dreadnought.

That will bother some people, but not TG. There's nothing worse than a soupy, indistinct acoustic tone, and the clipped clarity of the MT37-5 is ideal when you're shredding individual notes, as Thomson intended.

We really liked this guitar - almost loved it - and would advise everyone to give it a test-drive. Except the vicar, obviously.