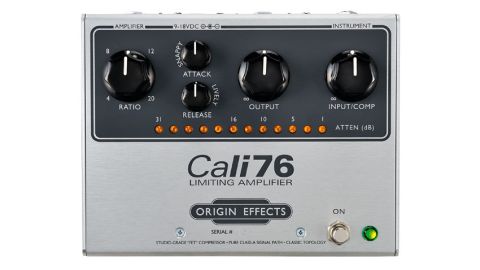 Anyone involved in a search for their compressor pedal holy grail among the many different designs out there might find the Origin Effects Cali76 a prime contender.

Compression is a necessary component in the mixing and recording process. But while its contribution to the sound is often essential, it can be subtle and not always obvious to the listener.

It's perhaps the perception that the sound doesn't change that much if you step on a compressor pedal that discourages some players from having one on their 'board and, to be fair, a compressor would probably be superfluous for some styles of guitar playing.

Nevertheless, there can be many benefits from playing through a compressor, such as smoothing out volume variations, increasing sustain and tweaking a note's envelope.

In the recording world, a select few compressors have achieved legendary status. One of these, which is found in every quality studio, is simply known as the 1176. Designed by Bill Putnam and based on the then recently invented Field Effect Transistor (FET), the first units appeared in 1967, and the model has been used continuously ever since.

Origin's Cali76 is a 1960s-style FET compressor inspired by the UREI 1176 with the topology of the design faithful to the original, but with the circuitry condensed to fit into a floor pedal. Effectively, the parts of the 1176 that weren't directly contributing to the tone were eliminated from the design, and the circuit was optimised for battery operation.

Designed and hand-built by Simon Keats, an electronic engineer and analogue circuit designer who has worked for Vox among others, the Cali76 is available in two flavours.

There's a standard version and the upgraded version we have here, which features another Class A output amplifier with a custom-wound transformer plus extra connectivity and tonal options in the form of a balanced line/DI output, pad and ground-lift switches, and a high/low gain switch offering the option of driving the output transformer for extra harmonic complexity. There's also a specialised version optimised for slide players, the SlideRIG.

The Cali76 is hand-built to a high standard, sporting a brushed aluminium chassis with the connections plus the small switches round the back. The top surface features a ratio knob to dial in the compression ratio, which ranges from 4:1 to 20:1, plus an input gain knob, which sets the amount of compression, and an output level knob.

Smaller knobs are provided to set the attack and release times. The gain reduction (up to 31dB) is shown via orange LED metering.

The first thing to notice about the Cali76 is how quiet it is - some stompbox compressors can get a bit noisy, but this one is well-mannered and more like a rackmount unit. Another thing is its tonal character. There's a subtle but distinct sense that what comes out sounds better than what went in, with a perceived increase in presence - on electric 12-string, it comes close to a Byrds chime.

With mild compression, the Cali76 is great for keeping chordal and arpeggio rhythm playing consistent - letting all notes ring evenly or smoothing out any peaks to keep it sitting in a groove. Funk players in the Jimmy Nolen or Nile Rodgers vein would find plenty to admire. And if your bass guitar sound isn't complete without some compression, the Cali76 keeps it tight and punchy.

The attack and release controls are key to dialling up the effect you want in terms of the sonic envelope, particularly for country pickers who are looking to modify the snap or spank at the start of the note and give equal emphasis to hammer-ons and pull-offs. The attack control neatly tailors the start of a note, while a fast release gives you a nicely percussive sound.

Slower release settings keep the compression going, and this offers a very real enhancement to slide guitar and lap steel in eking out a smooth sound with clean, languorous sustain.

The gain switch on our Transformer model gives it a touch more versatility than the standard model in terms of influence on the sound. Switching from low to high can introduce an element of grit or mild saturation into the mix, and it's always good to have a touch of that on tap.

The Cali76 offers compression that is just perfect for guitar and bass. While not the most affordable compressor pedals around, the Origin compressor range is priced very fairly for what you are actually getting.

If compression is essential for your type of playing, then one of these has to be a contender, and if you do any recording and mixing you'll definitely find many other instances in which it can be used.