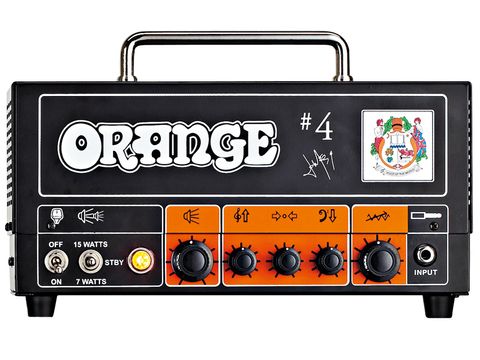 A versatile addition to the Terror range with no shortage of dirt,

Slipknot and Stone Sour guitarist Jim Root has long been a fan of Orange's Rockerverb 100.

"When I spoke to Jim to discuss a signature model, he wanted something that people could afford, so I suggested we make it a Terror. The appearance was Jim's idea as he is a fan of the look of the old 'pics only' amps, so we came up with what you see here."

Emsley also reveals that the appearance of the Signature #4 Jim Root Terror's matching PPC212 cabinet (£367) was down to the oft-masked guitarist: "He wanted real basket-weave grille cloth - not the material used on the bass gear - but in black. The speakers are Orange 'Voice Of The World' 12s, which have a vintage top end but a very fast and tight bottom end that tends to speed up with more power amp overdrive.

"They sound quite different to Celestion Vintage 30s and are not a copy. The cabinet contains two eight-ohm versions of this speaker, wired in series to make the cab a global 16 ohms."

The head itself is one of the most flexible Terrors to date, with a full three-band EQ and an ECC81/12AT7-driven FX loop alongside one 16-ohm and two eight-ohm speaker outputs. Providing you don't need a high-headroom clean sound then 15 watts might just prove enough juice to give your drummer a run for his/her money, with the seven-watt mode ideal for the increasing number of live venues forced to use noise limiters.

Turning your attentions to the Jim Root head and cab and you won't be surprised at the level of filth on tap. Didn't think you could play heavy metal with a regular single-coil Telecaster bridge pickup? Think again.

It's such a big throaty drive sound that for alt-rock and hard rock, single-coils work remarkably well and open up a wealth of bluesier tones with judicious use of the amp's onboard EQ and your guitar's volume control. Despite the livery, one-dimensional this ain't.

Switching to a guitar with humbuckers takes things into modern metal territory and you can really hear the immediate response of those Voice Of The World speakers keeping things tight and punchy, even with the massive bottom-end character of a seven-string or baritone.

For maximum articulation, we'd recommend resisting the urge to wind the gain right up, as there's more ferocity and definition to be had in the two-to-three o'clock region. Seriously meaty.

The 15-watt setting is where it's at for the stage but the seven-watt mode introduces a slightly more compressed tonality that's easier to control in the studio. That said, both power selections record very well.

One slight reservation about the design is that as cool as the 'pics only' front panel is, without words or numbers as a guide, making adjustments to your sound can initially be a little confusing, especially under stage lighting - but this is easily solved with stickers if need be.

The black livery and Slipknot association will doubtless leave many of you presuming that the Jim Root Terror is purely an amplifier for metalheads, but there's much more to it than that. If you play aggressive alternative rock, punk or are the type of straight-up rock player for whom a clean channel is an unnecessary luxury then definitely check this out.

It packs a seriously satisfying crunch that outperforms many more expensive high-gain heads.