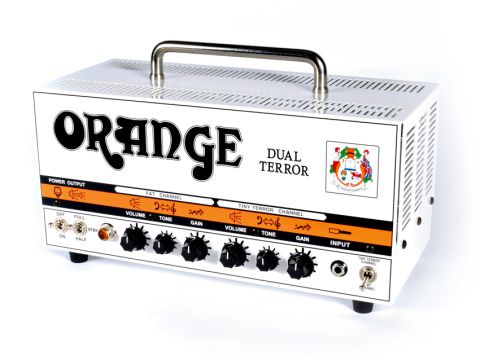 We reckon the majority of players looking at the Dual Terror will be staring their new amp squarely in the eye.

When Orange introduced the Tiny Terror in 2006, the pint-sized 15-watter was received with rapturous applause. The only downside was that guitar players couldn't get enough of it. So, much like that bloke from the Halifax advert, the Dual Terror gives you extra. Twice as much, in fact.

Double the wattage, double the valve count, double the channels - for less than double the price. The Dual Terror is simple in its approach with only three controls (Volume, Tone and Gain) per-channel, but you can also run at 30, 15 or seven watts, which lets you tailor the power to your situation.

The amp comes supplied with a substantially padded gig bag (handy for transportation, obviously), and Orange has also sent us a PPC 2x12 speaker cab to test the DT with. Let's get stuck in at full power on the TT channel.

Start off with the channel volume at about 12 o'clock and the gain between 10 and 11 o'clock and you get a chiming clean sound with just a subtle hint of dirt. Boosting the tone gives a little extra glassiness, which is perfect for ringing indie-style chords.

Conversely, lowering the volume and pushing up the preamp gain gets you a solid rock crunch tone with added punch and attack to your notes. Sceptics might be wary of the tone control (rather than the more standard, and apparently more flexible, three-band EQ), but this single knob makes dialling in your tones an intuitive, pain-free process.

Flicking to the Fat channel builds on the original tone by adding low end and a slight gain increase. The difference between the two channels is quite subtle (to our ears), but this is no bad thing. The flexibility of the Fat channel gives you just the right push for a lead channel, or it can add extra beef to heavier rhythm sounds while leaving the TT channel in a complementary setting.

Many guitarists have used the Tiny Terror successfully in a live situation since its release, but its single channel and lower output have been the stimulus of much chin-stroking among potential TT giggers. The Dual Terror solves this.

Size wise, it's still as portable as the original, but the 30-watt output means it's loud enough for most regular sized gigs, and the mere inclusion of the Fat channel (let alone the fact that it sounds awesome) seals the deal.