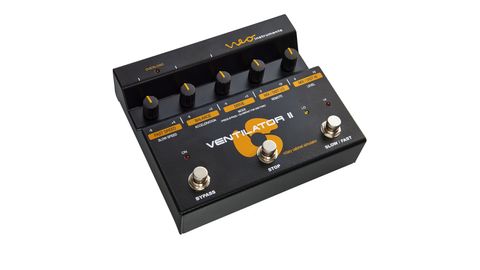 A realistic sonic emulation of a rotary speaker with a very practical footswitching setup.

The Neo Ventilator, modelling a Leslie 122 rotary speaker, garnered quite a reputation as a simulator that sounded pretty close to the real thing - now there's a newly released, updated version.

It's got three footswitches: the usual Bypass and Fast/Slow options, plus Stop, which simulates a stationary cab.

Five knobs control the main action, but each has a secondary function when you hold two footswitches down together, offering plenty of adjustment.

One of most expensive rotary speaker effects pedals we've seen, this is a serious unit with real attention to the detail of a Leslie sound. If you want a smaller pedal, the Neo Vent loses the knob adjustments but has two presets and costs less.