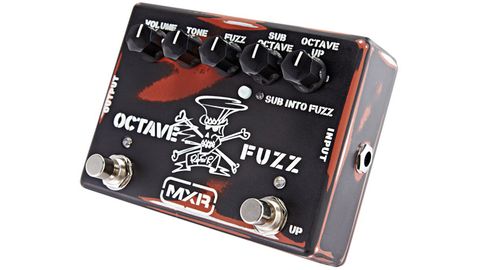 Fuzz plus octaves up and down: this stomper can cover a vast array of sounds from old-school Hendrix to lo-fi Auerbach, and a pretty cool Slash to boot!

Mr Slash doesn't necessarily spring to mind when you think of the glorious gloop of octave fuzz: that would be Hendrix or, more recently, Jack White and Dan Auerbach.

However, thanks to its use on the former Guns N' Roses guitarist's second solo album, Apocalyptic Love, MXR has brought out a signature octave fuzz designed to add girth to your tone, fuzz to your filth and more besides.

Using same distressed finish as the Dunlop SC95 Slash Cry Baby Classic wah, this provides a combination of gnarly fuzz with octaves both above and below the note you're playing.

The Sub Into Fuzz button activates the main fuzz which, to us, sounds more Fuzz Face than Big Muff Pi. You can then stomp on the Up button to add the extra, fuzzed octave-up note for which there are gain and tone trim pots on the inside.

If SIF is not on, you get no fuzz on the main note. The Sub Octave knob progressively dials in a single note an octave below what you're playing.

The SF01 is best suited to single notes; chords tend to present a few grim glitches, though lo-fi junkies will probably love that! Hendrix-style tones are faithfully recreated, but it's when the sub and high octaves are used with the fuzz that the walls begin to crumble.

Take some time to balance the levels of everything that's going on and you'll have a colossal sonic bombardment of three-octave artillery at your disposal.