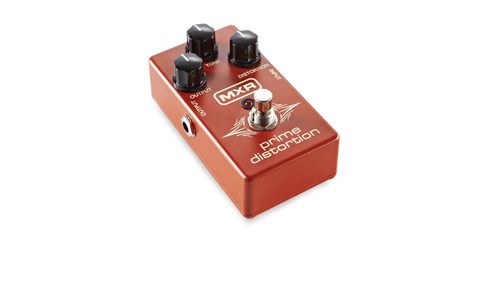 A lot of pedal for not much cash - it could make a worthy addition to your arsenal, even if it's not the only distortion pedal you own.

We were excited when we heard about the Prime Distortion: true bypass, metal enclosure and MXR's distortion lineage for £59? It sounds too good to be true, but this will withstand more abuse than most.

With the Prime Distortion's three controls - output, tone and distortion - set to noon, the pedal compresses and blooms like a cooking valve amp; reduce volume for a touch-sensitive overdrive with bite.

Single-coils shine through and humbuckers up the ante for more compressed tones. While the dirt leans towards vintage, its voicing is fairly low in the midrange, which makes it perfect for 80s metal riffing but less so for classic British rock, while more modern styles might require an additional drive or boost.

You need to be careful when adjusting the distortion level, too - the last quarter of the dial's range drastically boosts the gain, but the sound can get woolly. High-output humbuckers might cause problems when matching clean volume with distorted volume, as well.

A little more range on each of the Prime Distortion's controls could have made it a runaway success, but this is still a lot of pedal for not much cash, and could make a worthy addition to your arsenal - even if it's not the only distortion pedal you own.