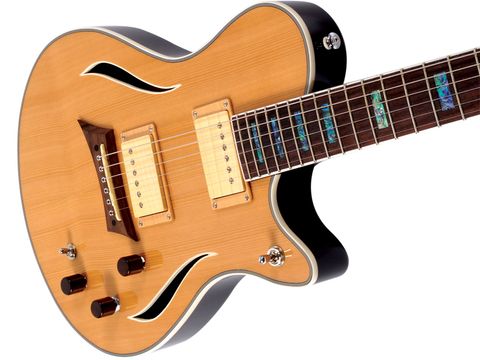 This hybrid doesn't just promise superior sound splicing, it also looks like the love child of a rock star and a carpenter. That said, it's a shame to spot a bit of mess through the f-holes of an otherwise nicely built Korean guitar.

"The Hybrid Special is a compromise - a single guitar will never widdle like a JEM and strum the same as a Martin - but it's a damn good one."

A good start, then, and the Hybrid Special doesn't drop the ball with its physical performance. It's light, but offers a deep rim depth, meaning that it feels natural for strumming on the lap and has a lovely resonant shimmer before you even plug in.

The string spacing is a relatively tight, but the combination of a short scale, manageable neck profile and set join enables us to cruise the fretboard and perform bends and vibrato with ease.

We're not kidding ourselves, though. The Hybrid Special is a compromise - a single guitar will never widdle like a JEM and strum the same as a Martin - but it's a damn good one.

We threw everything, from tapping to fingerstyle, at it, without ever thinking, 'This feels weird.'

Inspect the rim and you'll see the Hybrid Special has only one output. This might sound like a limiting factor, but it's not: one option is to plug in the 'Y' cable provided, thus splitting the signal and sending the piezo and mag outputs to different amps.

The other choice is to use a standard cable and one amp, at which point the two pickup signals are combined and you can blend them using twin volume controls, thus shaking up any number of sonic cocktails.

It's a little frustrating that there are no markers on the dials, so you have to blend by ear, but overall this guitar is reasonably non-confusing and requires no extra kit to get up and running. When you throw in the coil-tap feature, it starts to look even more tempting.

But, ultimately, it's the raw tone that really sells the Hybrid Special. The electric sound is top class, cracking out a nasty grind and screaming lead, then dropping back to a surprisingly snappy clean tone.

But the acoustic side is great too - you can feel the flavour of mahogany and maple - and messing about with the mix is a great way to unlock bespoke tones.

On the evidence here, hybrid tech is moving fast and sounding better than ever. It's a tight field, but the Hybrid Special is sitting pretty.