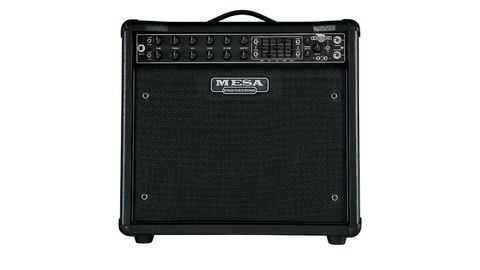 Back in 2007, Mesa launched the Express Series, superseding the F Series as the most affordable entry-point in its amplifier catalogue. 2012 saw the company tweak this popular line, and here is the 5:25 combo in its new 'Plus' incarnation.

New to the Plus models is a re-engineered clean mode that incorporates some of Mesa's Lone Star circuitry, and promises both additional sparkle in the high-end and a warmer low-end, with a "significantly better" signal- to-noise ratio.

Alongside the original Express models' preset contour controls, which provide a sweep of the company's classic V-shaped EQ, Mesa has added its prized five-band graphic equaliser here, allowing for more detailed fine-tuning. This can be assigned to each channel or bypassed completely if that is your preference.

There's also an additional Solo control, enabling a preset master boost to be engaged, to help your lead breaks cut through the mix. An included four-button footswitch gives you on-the-fly access to channel switching, reverb, the five-band EQ and solo boost.

Perhaps the most significant, headline-grabbing feature of the new Plus models is the inclusion of Mesa's patented Multi-Watt channel-assignable power switching , which features 'Duo-Class' technology.

In practical terms, this means that each channel has three independent power settings that alter the output, headroom and dynamic characteristics in the following way: full tilt sees the amplifier operating in push-pull Class AB, with the 5:25 running at 25 watts. Flip down to 15 watts and the channel in question will run in Class A pentode mode. There's also a third, five-watt mode that runs one valve (an EL84) in a single-ended, Class A triode configuration.

Although there's no shortage of online pedantry from electronics purists who argue that very few guitar amplifier circuits run in anything like true Class A, the overwhelming majority of prospective buyers of these amps will be interested in whether the sonic and dynamic characteristics cut the mustard for stage and studio use, rather than quibbling about definitions.

In the case of the combo here, Mesa has managed to pack a hugely impressive amount of functionality into a relatively compact enclosure, with the 19-inch width of the 5:25 proving to be a comfortable fit on the passenger seat of a small car.

One practical trade-off on that size is that the 5:25's front panel does feel somewhat cramped. This is especially true on the right-hand side, where the array of mini toggle switches in close proximity to the Solo and Preset Depth knobs can prove rather fiddly to manipulate in the heat of battle. Around the back, stowing the 5:25's supplied footswitch successfully is a job better suited to neurosurgeons and watchmakers than impatient, worse-for-wear guitar players on dark stages.

That aside, the amp is built to Mesa's expected high standards in the company's Petaluma, California facility, and gives us no reason to question its road-worthiness.

Powering up and engaging channel one's clean mode on full power, there's no mistaking the Californian accent of the amplifier, despite the stereotypically 'British' nature of the 5:25's EL84 output stage. There's plenty of 'blackface' Fender in the DNA of this model, with a Deluxe- or Princeton-like tone in places.

With the 5:25's output aided by Mesa's propriety Dyna-Watt technology, it punches well above its weight in terms of volume.

Flipping over to Crunch mode, the amp delivers a more midrange-y tonality that's just the ticket for sinewy roots and classic rock, older blues styles and even hard rock at the upper end of the gain spectrum, particularly with judicious use of the five-band EQ to taste. Given the tonal versatility across both voices of channel one, and the small-amp-to-big-amp power scaling options, this channel alone would be more than enough amp for many players, yet it's only half of the story.

Flipping over to channel two in Blues mode, you'll find a voice that's much more Gary Moore than Muddy Waters when it comes to the level of gain available. However, don't discount the highly musical tones that are available when you dial the dirt back. Channel two doesn't have to be your dirty channel - indeed, one of the most versatile combinations we found for stage use had channel two's Blues mode dialled in for edgy cleans, and channel one's Crunch mode set up for dirtier lead excursions.

When channel two is set to Burn, the 5:25's EL84 power stage, Celestion Vintage 30 driver and small cabinet lend the amp's high-gain voice a slightly nasal character that struggles to punch with enough authority for a truly convincing metal rhythm sound, but it can definitely get into the right ballpark for a few heavier numbers in a pub covers set.

It's also got that modern Boogie characteristic of a slightly soft attack when compared to the fast response of many vintage-style hand-wired circuits, with a smoothness that almost feels like some light studio compression has been applied somewhere in the signal chain.

The reverb is smooth and soupy, too, and it's very forgiving, dynamically, but this is still an amp that may take a little getting used to.

If you're in the market for the ultimate compact, do-it-all combo and money is no object, we wouldn't hesitate in recommending the Gold Award-winning Mesa/Boogie Mark V. However, it's well over two grand at current street prices, and thus too damn expensive for most of us.

The tweaks to the Express Series bring these new Plus amplifiers significantly closer to the massive versatility of the Mark V, for a lot less cash. For the majority of players, the 5:25 delivers a whole lotta grin for the money.