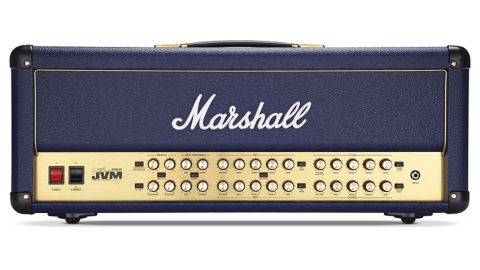 A monster head: without doubt one of the best Marshalls ever.

Marshall arrived a little late to the signature amp party, its first player-branded head wasn't produced until 1996. But since then the British firm's artist range has expanded to include some epic models that have raised the bar for the company's tone and flexibility. Now, one of the world's most respected and influential players has finally been honoured with his own Marshall: Joe Satriani.

After a long partnership with Peavey, which yielded the excellent JSX amps, Joe returned to the Marshall fold for his Chickenfoot project. With the supergroup, Satch used a modified JVM410H, and that has been tweaked, fine-tuned and transformed into the splendid all-singing and all-dancing signature model you see here the JVM410HJS Joe Satriani Signature head.

It's a truly impressive box to behold - big and very heavy, weighing more than some 1x12 combos! Much of that is down to the extra-deep steel chassis and two huge transformers that look as though they'd be more at home powering a small village. The cabinet is typical Marshall, using top-quality ply and finger-jointed corners, with expertly applied vinyl and piping. This particular head is one of a limited-edition run in blue vinyl, echoing Joe's former use of the 30th Anniversary heads, but traditionalists can also purchase it in black.

The Satch's internals seamlessly blend traditional and modern engineering techniques. As you might expect, practically everything is mounted on printed circuit boards, including the valve bases and all the front-panel controls. However, the boards are exceptionally good quality, mounted in the chassis with through-plated holes and plenty of standoffs for a rigid and robust construction that will take any abuse professional touring can dish out.

The JVM's control panel is equally impressive, with no fewer than 28 rotary controls. However, you'll be relieved to hear that it's very easy to navigate, while being even more versatile than all those knobs suggest. Whereas Joe's JSX amp boasted three channels with active EQ and a noise gate, the JVM is a proper four-channel head, with separate clean and crunch channels and two lead channels called OD1 and OD2. Each channel has a full set of gain, volume, bass, mid and treble controls.

Standard JVMs feature a digital reverb with four separate level controls, but the Satriani version has swapped this out for a clever noise gate with individual threshold controls for each channel. The final four knobs are two global master volumes and presence and resonance controls to fine-tune the mighty power amp's response.

All good stuff, but the fun starts when you investigate the unassuming black push buttons and find that each channel actually has three distinctly different voicing modes green, orange, and red that progressively increase in gain. All the channels and modes have been precisely tuned to Joe's needs. The OD1 and OD2 channels have a little less gain than a regular JVM and are actually identical, based on the original JVM's OD1. However, the inclusion of a new programmable mid-shift button will modify either channel for the traditional OD2 voice that Marshall users know and love.

The JVM's rear panel includes five speaker-out jacks, a simplified programmable series effects loop with a return level control, and a pair of non-programmable insert jacks with a bypass switch. There's a speaker-emulated balanced line-out via jack, rather than the more common XLR, and another jack for the clever programmable foot controller. Finally, the JVM has a pair of MIDI sockets for remote control of MIDI effects devices. Overall, the JVM410 is a heavy duty yet beautifully engineered amp, ready for the world's biggest stages.

Let's start with the clean channel, where the traditional gain-before-EQ Marshall configuration has been reversed to give a character that's more Fullerton than Bletchley. Based on the 6100 Marshall 30th Anniversary heads used by Joe up until around 2001, the green mode delivers a crystalline shimmer that just needs a touch of compression and chorus to sound huge. With the channel master volume disengaged to maximise headroom, this is one of the biggest clean sounds you'll ever hear from a British amp. The orange mode engages the master and adds a touch more bite to fatten things up, while the red mode adds yet more gain for a jangly, harmonic-laden rhythm tone that stops just short of being a proper crunch sound.

The crunch channel puts the gain section back before the EQ for the familiar Marshall response: here, the green mode emulates the early JMP master-volume tone; the orange mode captures the JCM800's bark; and the red mode adds more gain for the hot-rodded JCM800 tone that typifies 1980s rock guitar. As mentioned earlier, the two lead channels are identical and based on the standard OD1 lead sound, but have a programmable mid-shift that can transform either or both channels into the slightly scooped OD2. Overall, the sounds are colossal super colossal, in fact. Ahem.

The clean channel's clarity and punchy response is great fun, and emphasises the characteristics of whatever guitar you use the buttery warmth of a Les Paul with both pickups on in orange mode is spectacularly good. The crunch channel provides practically every classic Marshall tone you could easily record a whole album with the three modes on this channel. Both lead channels are slightly less gainy than a standard JVM, yet still capable of insane overdrive when pushed hard, and with better note definition, too.

All the tricks you might want to pull with these channels become so easy it's almost as if the Satch has a built-in 'talent boost' circuit. The noise gate is simple to operate, using a clever traffic light-coloured LED to let you see it in action. It's also highly effective, killing most hum and hiss without squashing the amp's huge dynamic range or cutting notes off too quickly.

Brilliant though the sounds are, the Satch's secret weapon is the operating system that automatically remembers your last mode, loop, noise gate, master volume and mid-shift setting every time you change channels. A further prod on the control panel or footswitch will change modes and that setting is then remembered until the next time. This is borderline genius stuff, and it makes this monster amp a doddle to control.

You can also set up the footswitch to work in conventional patch mode, where you set your channel settings and store them on each button. Because the footswitch holds the memory, you can plug it into any JVM Satch and it will configure the amp's settings accordingly.

Since its introduction, the standard JVM has become the flagship of Marshall's modern range and the head of choice for many touring pro players. This has taken an already massively powerful tool and further refined it, sharpening that sonic edge to razor-like keenness. The lack of reverb isn't a problem if you play big stages or have an external effect solution, of course, and the noise gate is a positive bonus that emphasises the JVM's huge dynamic range, as well as being as subtle or aggressive as you want.

With four channels, 12 modes and nine distinct gain structures, it's definitely a step up from the JSX in terms of features and controllability. All in all, the JVM410HJS is amazing value for money.

Few amps that can match it for tone, features and versatility even if you shell out the extra on the royal blue limited edition. Whether you're a Satriani fan or not, this is a formidable rock head.