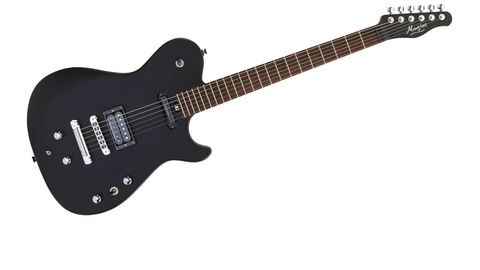 Stylistically, Manson's M Series guitars are based on the good ol' Fender Telecaster platform, but for the MA-1 EVO the shape has been given a unique visual overhaul, courtesy of the Devon-based firm - with a trimmer waist, a deeper treble cutaway and a subtly bigger shoulder.

The 46mm-thick alder body, with trim belly cut and gently radiused forearm contour, is covered completely by the industrial-look 'dry satin black' finish, which gives the guitar a very functional rock appearance: play me, don't just look at me. And playability is what the superb neck is all about.

Again, there are no frills - the compound radius rosewood 'board has no face markers, just small side dots on the join line between the maple and relatively thin rosewood.

The fretting, from a chunky but not over-big wire, is perfect, like the setup. The actual 'soft V' profile combines reasonable depth - 20.6mm at the 1st fret, 21.6mm at the 12th - with a sloping shoulder that makes you think it's thinner than it actually is.

This streamlined, detailed build continues through to the hardware: we have superb Gotoh HAP tuners - the height-adjustable posts mean Manson can set just the right back-angle for the strings behind the perfectly cut black Tusq nut without resorting to string trees.

By design, the guitar uses the Gibson-like standard of a (Schaller) tune-o-matic-style bridge and stud tailpiece. Not only does this set-up give a midrange push to the sound, but it also means the intonation is spot-on. The guitar is really stable tuning-wise, and sounds beautifully in tune at any fingerboard position.

The pickups are a Seymour Duncan pairing (JB at bridge, Cool Rails at neck) with a volume, tone and three-way toggle pickup selector.

"Combined with the coil tap option, it gives a huge range of sounds. It's named after long-serving Manson tech Jeremy Owens - it's our MOre JO switch!"

Eagle-eyed readers might have noticed the two black-tipped toggle switches. Indeed, the switch placed between the volume and tone is the standard pickup selector; the one on the shoulder is a killswitch: standard on Evo models.

Speaking of extras, in the finest traditions of Matt Bellamy, the MA-1 comes fitted with a built-in Z.Vex Fuzz Factory, hence the additional two rotary controls behind the bridge and the chrome two-way on/off switch. As Ashton explains:

"The Fuzz Factory circuit is a fourth-generation custom-install module, developed with Z.Vex and Manson with custom Bourns pots (expensive, but the best!) and factory-modded by Z.Vex in the US. All circuits use the USA Fuzz Factory circuits, not the cheaper Vexter circuits."

Hold on to your hats, you're about to enter a parallel universe. But before we go there, we should report that this guitar, despite its otherworldly sonic options, can sound very conventional.

That's after you realise that with the upper toggle in middle position - to Les Paul users, both pickups on - you'll have no sound, as that's the 'kill' position: flick it to either 'neck' or 'bridge' and the guitar functions.

And another thing to remember on the MA-1 is that with the tone control switch in regular down position it is the parallel setting for the neck pickup, the more 'single coil'-like tone and the lower output of the two modes. So, if you flick back to the JB, the pickups seem a little unbalanced output-wise.

With the tone switch up, however, the neck and bridge are more balanced. It means there's plenty of flexibility sound-wise: some nice funky cleans with the Cool Rails in parallel mode, a little edge added with both on, then the good ol' slam from the JB.

For classic rock, this is a great guitar with a big ring and clarity aplenty. Up the gain, and it laps it up - the JB here has surprising clarity in dirtier settings, and the series position of the Cool Rails is like a mid- focused Santana-esque voice, an almost-hot P-90.

The factory-set Fuzz Factory is an altogether different kettle of chaos. As supplied (as it's set on Manson's Matt Bellamy guitars), it was either off or in self-oscillation mode and, well, a bit out there.

Adjusting the internal trim pots (volume, gate and drive), we get closer to the very broken-sounding old-school fuzz that was more useful. The stability and compression controls need to be treated carefully, especially that stability control, but then 'out there' sounds are what a pedal like this is all about.

In its standard formats, this is an excellent modern rock-intended instrument, superbly made with a Tele-meets-Les Paul-on-steroids voicing. With an expansive pedalboard, there's little you couldn't achieve.

The optional Fuzz Factory is not for the faint-hearted - make sure you know this pedal before you order one pre-fitted. The Sustainer, however, needs to be onboard, and it performs superbly.

While the stability and compression controls of the onboard Fuzz Factory give you easy control for some other-worldly sounds, we'd be tempted to go for the Sustainer on the guitar and have the Fuzz Factory on our pedalboard. You, many Manson customers, and Muse fans, might disagree.