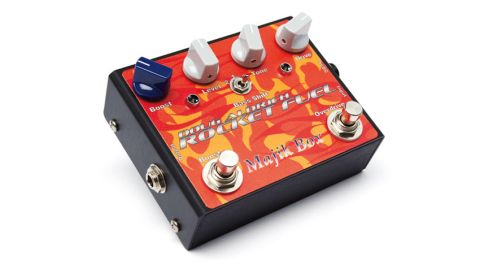 A tonal elixir that won't quite do all the work for you, but will make sure your scorching hot distortion tones sound the best they possibly can.

Designed with Whitesnake guitarist Doug Aldrich, the Majik Box Rocket Fuel aims to provide a ballsy overdrive tone that doesn't cut any of the lower frequencies, partnered with a specifically voiced clean boost.

The overdrive section is focused more on already-distorted tones and, as such, sounds disappointing when applied to a clean channel. Stacked on top of some existing drive it's a different story, though.

On its own, the gain control adds a natural and transparent drive to your amp to drive it that bit harder, but kick in the boost and you'll find the sound enhanced in every area of the tonal spectrum. It's almost like hearing your tone in high definition, and once you switch it off you'll realise just how much potential this box unlocks.

Even the attack of your guitar strings sounds and feels more musical, emphasising your individual touch and lifting your tone above the mix. Bringing in the three-way bass-shift switch gives you full control over lower frequencies, ideal for switching between different guitars and pickups.

Despite our early reservations with the overdrive section's effect on a clean channel, the Rocket Fuel has made a serious impression thanks to its distinctive voice and tone-shaping qualities.