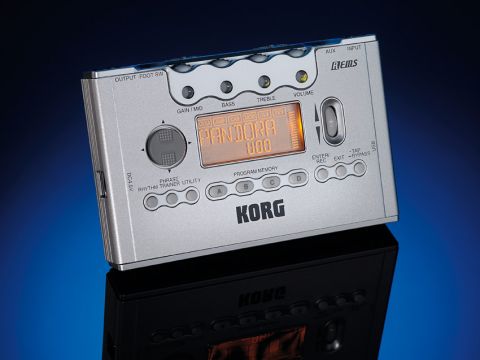 The PX5D is a useful tool for any guitarist at a very reasonable price.

It's been a few years since the last addition to Korg's pocket-sized Pandora family, but in early 2008, the fifth generation finally arrived.

Earlier models were fine examples of how to squeeze the maximum practising and jamming potential into a tiny box, and it's nice to see that Korg has kept up with technological advances, squeezing even more features into the PX5D. It's actually even a little smaller than the PX4D.

Despite the lack of space, the controls and connections are laid out clearly. There are standard jack connections for the main input and output (the latter doubling as a headphone output) and mini jacks for the aux input and footswitch connection. For the latter, a Y adaptor is provided for connection to two footswitches.

The on/off switch has a third USB position, used when the PX5D is connected to a computer via the supplied USB cable. This can be used for recording direct to your PC or running the editor software, and in both cases the Pandora draws power from your computer.

If you're not using the USB option, power is provided either by two AA batteries or a 4.5 volt DC adaptor (not supplied).

In standard Play mode, the PX5D's presets are accessed via the up/down cursor buttons. You always have instant access to the gain, tone and volume of the amp or synth models via the four knobs on the upper edge, and the data wheel to the right of the LCD screen is used here for master volume.

For editing patches, you access parameters via the left/right cursor buttons, adjusting them with the data wheel. You also have the option of saving four presets to the soft keys immediately under the display for quick access.

Moving swiftly on, there's more than just one mode on the PX5D. In Rhythm and Bass mode, accessed by pushing one of the tiny buttons below the LCD screen, you have access to 128 drum rhythms and bass patterns.

There are simple patterns in a variety of styles, which can be chained together (up to 16 at a time) for greater jamming variety. There are also three demo songs, for which the tempo and key can be adjusted to taste.

Next is the Phrase Trainer mode, where you can record short clips from CD or mp3 (via the aux jack) and slow them down to as little as half speed. The maximum length of these clips is 20 seconds, but this can be increased to 40 or 80 seconds with a corresponding reduction in sound quality.

Audio - A variety of preset sounds from the Pandora

The most impressive aspect of all of the Pandoras so far has been the huge range of effects, and the PX5D is no exception. To give you an id ea, there are 28 guitar and bass amp models, two synth models, 41 filter and modulation effects, 11 reverbs... you're not likely to run out in a hurry.

Overall, we find the headphone sound on the bright side, so do take care with the volume levels - the PX5D can get loud. You can tame the brightness easily by adjusting the treble and bass controls on the offending patches.

Otherwise, we are very impressed. The drum and bass sounds are fat and surprisingly realistic and there are lots of inspiring guitar tones among the presets. At the heart of the sounds are some good amplifier models; they're possibly not the most accurate we've heard, but they're perfectly representative of the classic boxes at which they're aimed, especially in the realm of headphones.

Once again, Korg has well and truly excelled with the more unusual sounds; there are some wonderfully creative applications of filtering, auto-wah and synth sounds here.

While you can buy standard multi-effects units with similar features for less than the price of a PX5D and a couple of footswitches, that's not entirely the point. Part of the appeal of the Pandora range is the portability - a complete guitar rig and 'practice suite' in your jacket pocket.

What's more, the huge range of effects on the PX5D will outdo a number of similarly priced floorboard units. The convenience of miniaturisation comes with compromises (fiddly patch navigation, relative flimsiness and the need for battery power) but the strengths far outweigh the weaknesses.