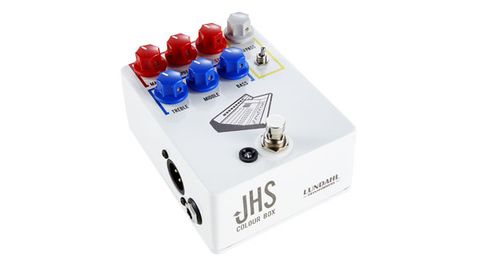 Many well-loved recorded tones have originated from a guitar being plugged directly into a mixing desk.

Now, we're not talking any old mixing desk here, but something classy with a well-designed preamp and EQ section. Something like a vintage Neve console.

The all-analogue Colour Box is based on vintage Neve circuitry and designed to deliver those direct-recorded tones.

For cleans, it works brilliantly to give you a full sound that can be shaped by the three-band EQ, but driving a console has yielded many classic guitar sounds - the most celebrated likely being The Beatles' unruly Revolution tone.

You can drive the preamp here for thickening and eventually that kind of fuzzy harmonic distortion... which could also be handy in front of an amp.

Over £300 is a big outlay, but then this is no mere pedal. If you do a lot of recording with a variety of sounds, it is something you'll want to keep handy.