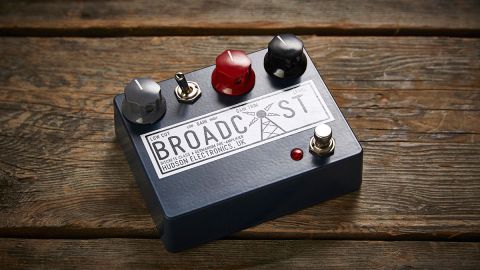 Despite its vintage roots, the Broadcast is a breath of fresh air: thoughtful, adaptable and full of tones to make you grin. It's sensibly-priced, too. We love it.

The battleship-blue enclosure of the Broadcast lends it the aura of serious audio gear from the era when studio engineers wore brown overalls and ties to work...

Yes, the Broadcast, made up in Yorkshire by Hudson Electronics, takes its inspiration from the sound of RCA recording consoles of the 60s. Hudsons's own description of the Broadcast is a "Transformer-coupled, discrete Class-A germanium pre-amplifier".

Don't be scared off by the studio lineage, though: the Broadcast is, at heart, a surprisingly versatile, vintage-voiced fuzz pedal with genuine crossover appeal for players who normally prefer boost or low-gain overdrive to outright fuzz.

Looking inside, the first thing you notice is that the circuit, including its dinky, steel-core transformer, is built on Veroboard, aka prototyping board, but very neatly and securely, with not a hint of the 'weekend project builder' about it.

There's a silicon transistor at the front end of the circuit with a NOS germanium transistor downstream of that for the drive sounds. This arrangement means that the Broadcast isn't sensitive to where it's placed in the signal chain, unlike conventional germanium fuzz pedals that really need to go first to give anything like their best sounds.

Controls (built on Alpha pots) are deceptively powerful, although simple to use. The Level control is effectively a master volume, while the Gain Trim adjusts the amount of dirt within the selected gain range, which is governed by a chunky Low/High Gain switch.

The Bass Cut is more sophisticated than it sounds - not merely a passive tone pot, it governs the amount of gain applied to bass frequencies. The pedal operates from a nine-volt DC supply (but not batteries), drawing 20mA, and can be run at up to 24 volts for extra headroom and low-end clarity, if you wish.

In Low Gain mode, the Broadcast gives a characterful vintage boost, which turns into a delicious warm crunch at higher Trim settings - it's like a good low-gain overdrive with extra chime built in.

Switching to High Gain, however, gets you into the territory of Jimi and The Stones: those blistering, abrupt vintage fuzz sounds that evoke Woodstock and Satisfaction. There's also a core of clear, singing upper mids to its sound that make it not unlike a treble booster. Classic Brian May sounds are very possible with the Broadcast, too, and to our ears it seems to love EL84-based amps in particular.