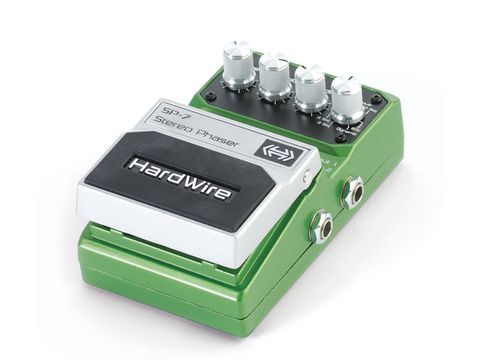 Few pedals offer such a wide range of cracking vintage and modern phaser tones, with true bypass, delivered in an easy-to-use package.

When guitarists try to describe what a phaser pedal sounds like, they say 'swirling', 'swooshing' and, 'like a flanger but doesn't sound as much like a jet plane taking off'.

Well, a phaser is the vital tonal ingredient in Eddie Van Halen's Eruption, country outlaw Waylon Jennings' Telecaster twang, and Brian May's huge tone on Queen belters, We Will Rock You and We Are The Champions. Now you're up to speed.

The new HardWire SP-7 multi-stage stereo phaser pedal has true bypass circuitry, a tap tempo function and four knobs, three labelled Speed, Depth and Modify, and the fourth being used to select the type of effect.

Funnily enough, Speed controls the rate of the phase effect and Depth alters its intensity. The multi-function

Modify knob acts as a bias, feedback or sensitivity control depending on which type of phase you select.

Speaking of which, the more stages a phaser has, the greater the number of 'notches' in the frequency spectrum, resulting in a more intense swoosh to the phase sound.

Envelope and Dynamic are triggered by the intensity of your playing.

We reckon the first two settings on the type knob will be the most often visited. That's because 2 STG offers a subtle effect, perfect for '60s obsessives and country players looking to colour clean tones, while 4 STG is the choice for a 70s Van Halen tone.

The great thing with the SP-7 is that where Eddie had just one knob to play with, you have speed, depth and feedback controls at your disposal.

Something really cool happens to a phaser when you mix it with overdrive. Lead licks become thick and soupy, false harmonics thrillingly unpredictable.

The Dynamic setting is a blast too. Crank the Speed, Depth and Modify knobs and hit a power chord. The phaser doesn't kick in until the chord begins to fade. It's a bit like Baba O'Riley by The Who.

By the way, 10 STG is great if you want an over-the-top watery-sounding phaser. The SP-7 has all angles covered.

The tap tempo function allows you to set the modulation speed of the SP-7 with a few stabs of your foot. It's great for live performance, naturally, but you can get freaky with it too. Try accelerating the speed at the climax of a solo. We did. It sounds great.

You're not going to use a phaser all the time, so spending a few sheets shy of £150 might seem like a lot to add some occasional tonal colour to your signal chain.

Yet the SP-7 challenges the supremacy of a bee's kneecaps. Trust us, this isn't just another phase you'll be going through.