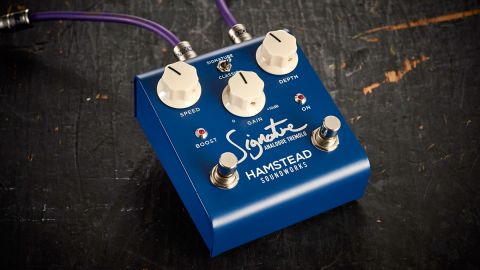 This is one of the best-sounding tremolos we've heard, and having the boost facility reinforces the fact that this is money well spent.

Hamstead Soundworks is a British company that produces hand-built guitar amplifiers, the Artist 20 and the Artist 20+RT, as used  by Carl Verheyen and James Bay, among others.

The tremolo circuit from the Artist 20+RT (the RT denotes reverb and tremolo) has now found its way, with a few extra features, into stompbox form as the Hamstead Soundworks Signature Analogue Tremolo.

At first glance, you might mistake the pedal for one of Strymon's smaller offerings, such as the BlueSky, but while it features the same rugged two-part chassis construction, it is marginally smaller and has a subtly sloping top for easier access to the two footswitches.

The pedal provides boost and tremolo, so you get an independent footswitch for each of those functions. As shipped, the pedal features buffered bypass, which Hamstead recommends because it provides silent switching, but there's an internal DIP switch should you wish to change to true bypass.

First impressions are of a classy, noiseless, clean- sounding pedal, with the ability to do its job whether in front of an amp or in the send/return loop. The boost footswitch can supply up to 10dB of clean gain, set by the central knob in the pedal.

Two types of tremolo are available via a toggle switch. Signature is Hamstead's own true sine wave tremolo and it sounds gorgeous: smooth in its undulation with plenty of musical capabilities care of the thoughtfully chosen ranges of the Speed and Depth knobs.

Classic is more of the same but delivers the sound of output bias trem as found in some vintage amps - slightly edgier and more sharply defined in its on/off status. True to amp tremolo form, you do get that typical perceived drop in level when you bring the Classic trem in, but the Boost can compensate for that if needed.

Pedals with two separate footswitchable functions are great for keeping a pedalboard less complicated, but also as a practical standalone asset for those who like a minimal rig and signal chain.

To that end, the combination of all-analogue boost and tremolo make this a great purist's pedal that could complement a decent single-channel valve amp to offer both a leg-up to a more driven tone, as well as a touch of pulse and throb when needed.