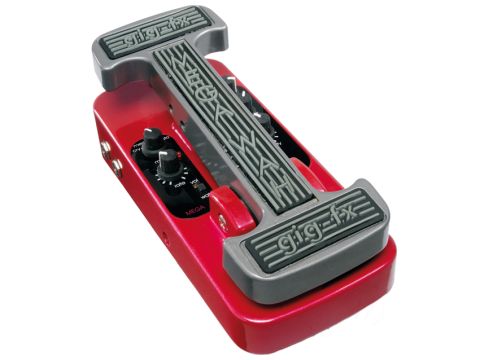 High quality and versatile, the Mega-Wah is impressive. Anyone new to wah should stick to something cheaper and simpler, but for experimental types, it's well worth a look.

First is that unusual treadle design that, far from being a mere gimmick, is as easy to manipulate as any other wah out there. The treadle itself is fairly stiff, which is a good thing, and the shape frees up a little bit of space on the remainder of the top panel. That's fortunate, as the wah offers no less than four basic modes that, by flicking a switch or two, can be increased to six. As the pedal offers two independent circuits, the effect is genuinely stereo so you get stereo inputs and outputs to take full advantage. The whole thing is governed by gain, resonance and sensitivity pots.

A four-way rotary pot enables you to flick between modes, with Cry being a familiar place to start. Mega mode is a more extreme version of the wah, while the speed of the Autowah function can be altered via the rate pot. The Trig mode enables you to open the filter with single chopped notes. It's all good, and the flick of another switch magically turns the unit into a volume pedal.

The Cry mode is a good stab at the classic wah tone. Switch to Mega and the filter opens much more quickly for a more pronounced effect; more of everything, in short. The Trig and Auto settings mean you can take your foot off the pedal for funky fun, but the weirdest setting is stereo reverse: one goes up, the other one down, which is very freaky sounding indeed.