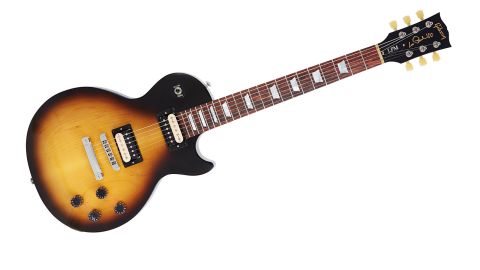 A lot of guitar for the money with a ballsy rock voice. You might love it at first listen but we'd choose the Studio.

The 'maple' in this Gibson's abbreviated name refers to the LPM's neck, a pretty unusual choice over the mahogany usually used on an LP.

It's the most affordable 'proper' carved-top Les Paul, and like the majority of models in this year's line-up, employs the 'robot' G Force tuners, height- adjustable brass zero fret and wider neck dimensions along with a gloss nitro finish and the blingy gold moulded case.

There are no options (colour aside) in the 2015 line-up, but each model has its own specific recipe. Here, for example, we get the densest grade of mahogany for the back wood selection and consequently one of the heaviest 'Pauls we've ever played, despite the quoted nine-hole weight relief. We suggest Gibson makes those holes bigger!

The maple top has the least dished top carve of the range and is of the lowest grade that Gibson offers, which certainly works under the see-through red and black finish options, but does look very plain under this vintage sunburst.

It's quite an unusual 'burst, too. While the main shading is applied just to the top, the dark black outer colour is sprayed over the sides, the natural edge 'binding' of the maple top at the waist and base, and over the heel - leaving the maple neck back natural. If we're honest, it looks like a mistake.

The fingerboard is supposed to be the lightest colour rosewood, but it's pretty rich looking with some vibrant orange-y streaks that offset the classic inlays.

The satin chrome-finished bridge and stud tailpiece look classy, while the uncovered 61 Zebra pickups, with Alnico V magnets and slightly unmatched coils, are controlled in the usual fashion.

The neck profile is 'rounded' and it also has quite a taper from the lower positions up to a pretty chunky curve by the 12th. Obviously, along with the added width, the overall girth factor is... Well, let's just say it's an acquired taste.

The LPM kicks off with an energetic rock assault that recalls many a fiery Les Paul. Classic PAF tone it ain't, but then it doesn't take us down the death-metal rabbit hole either.

These pickups seem powerful with quite a crisp high end, no doubt helped by the maple neck. As we concluded in our previous test of the 2015 Les Pauls, the wider neck - albeit with standard string spacing - does take some getting used to. But we have to be honest and say that, with playing, you do adapt. If you like a chunky rounded feel, especially in the upper positions, this has it.

The tuning system needs its own review with its host of features and open/altered tunings. Simple retuning (certainly when we'd fully charged the battery) was actually faster than we remember from our previous test, but if only they'd make the on/off button a different colour - black on black isn't going to be particularly helpful on the sort of pub/club stages most of us get to play on. And, as before, when we switched to another guitar after the test, we had that "oh, you mean we've got to tune it manually!?" moment.

Sitting in the pub or scouring the internet is all well and good but experiencing the actual (rather than the imagined or assumed) feels and sounds of different instruments is essential.

We wonder, for example, how many people have rubbished Gibson 2015 guitars without ever playing one? Well, we've played a few now and, yes, they're not for everyone, but spend some time with that tuning system - especially if you're into altered tunings - and, like us, you'll begin to see the logic behind it.

The LPM is no slouch on the energetic rock front either, but we'd save a little more and go for the slightly more classic Studio, especially if we wanted to cover more tonal bases.