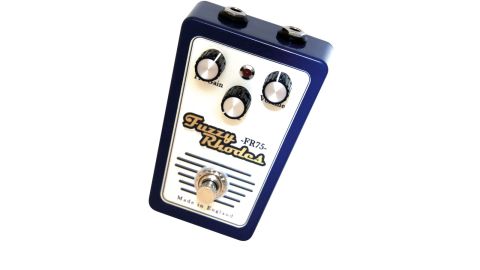 One for the fuzz-tweakers out there, but it's still good value for a boutique vibe and sound.

Langrex may be a new name in effects pedals but the well- established West Sussex company is the largest supplier of valves in the UK and also lays claim to having the largest stock of Germanium transistors in the world!

Supplying these transistors to pedal builders gave the company the idea to produce its own fuzzbox, the Fuzzy Rhodes FR75, based on a Sola Sound Mk1.5 Tone Bender from the 60s, the transitional model between the first Tone Bender and the Tone Bender Professional MkII.

The Mk1.5 featured just two transistors in a circuit which was borrowed by Arbiter for the Fuzz Face and also used in Vox Tone Benders, produced in Italy.

The FR75 uses a Mullard OC75 Germanium transistor, like the original, but pairs it with a Silicon transistor to combat volume loss.

In addition to standard fuzz and volume controls, the FR75 adds a pre-gain knob that works well in matching the pedal to your pickups' lower settings, yielding a leaner sound.

The knob adds impedance, so you can use a wah in front of the fuzz without the usual feedback/oscillation problems. Soundwise, it's authentic 1960s fuzz all the way, and you get an internal transistor bias trim pot to dial in your preferred sweet spot, too.

If you saw our recent run of boutique fuzz pedal reviews, you'll know fuzz comes in many flavours and can be expensive, but less than £120 for a hand-built fuzz isn't bad if the FR75's flavour is to your taste...