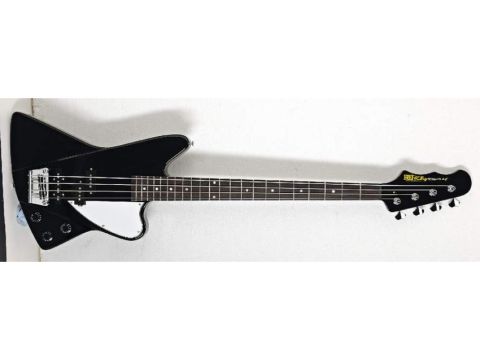 Summoning up bass greats like the Thunderbird, the Esprit produces a better range of sounds with plenty of style.

As the Thunderbird has always proved to be a popular design the relative lack of 'alternative' models produced by other manufacturers is rather surprising, so top marks to Mr Wilkinson for putting this to rights and for introducing a very effective design twist on the body.

Rather than presenting the full 'reverse body' concept this Fret-King neatly combines this element with the later 'non-reverse' look in order to produce something visually different and eminently more practical when it comes to instrument balance.

This just looks so cool and in this gloss black finish with white scratchplate there is something distinctly art deco about it. However, as always, these body shapes are a nightmare on a regular guitar stand so make sure you have one of the 'hanging from the headstock' types to avoid nasty accidents.

The bridge is again surface mounted with a raised tail but here the tail accepts most of the ball-end of the strings and the whole unit is suspended above the body surface.

The single saddle is adjusted for height by the retaining posts and for intonation by just two screws. Although in essence this offers a compromise in the intonation, in reality we found it to be perfectly acceptable and exactly right in a visual context.

The tilted back headstock and upside down tuners are also totally in-keeping with the general look of this instrument and for once the usual concerns of balance that generally apply to this design have been completely eliminated.

Not only does this stay where you put it, even the painted neck feels nicely in proportion and ultra smooth. This design may not be to everyone's taste but it's important that you give it a fair crack of the whip - it's surprising just how user-friendly this particular set-neck/slab body design feels.

Normally this style of bass is associated with dual humbucking pickups but here the configuration is again P/J. It's a viable alternative as it provides a much more expansive range of sounds.

Naturally, as this has the same passive circuitry and pickup configuration as the Perception you'd expect the Esprit to sound pretty much the same - in reality the different woods and construction give this bass a slightly edgier sound, with cleaner note definition.

Gone are the booming and indistinct delivery associated with those early T-style basses to be replaced with something much more versatile and sonically pleasing. There's plenty of old-fashioned oomph but you can hear the notes as well as feeling the sound - definitely a more desirable effect.

However, it must be said that the main selling point of the Esprit is its visual impact rather than the quality of its sounds.

It's a very stylish bass indeed and with the extra touch of originality on that body design this is either going to give you that wow factor or have you running a mile.