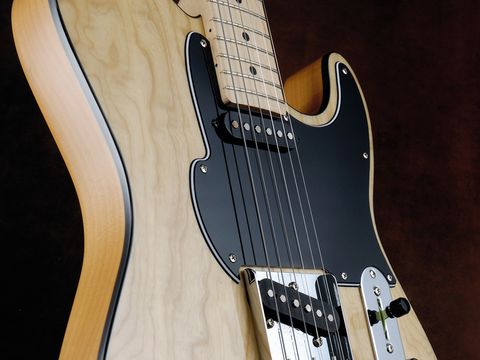 Inspired by Donahue's sonic sorcery, the Fret-King JD is a 'custom shop'-style guitar at an off- the-peg price. That goes for the sounds too. Any gigging guitarist drawing from the classic Californian tone well should check it out.

With a long and varied career to date, Jerry Donahue is known for his slippery string-bending, his clean Tele/Strat tones and a string of signature guitars from Fender, G&L (briefly) and Peavey. His latest home is in the UK with the Trevor Wilkinson-designed Fret-King brand.

This new JD model also introduces Fret-King's Black Label range, which will be made in the same Korean factory as the existing Blue Label range but will focus on signature models.

Squarely based on the Telecaster, it's far from a copy. "The reason I got into Stratocasters was that I was never ever drawn to the Tele - I'm talking about when I was 12 or 13," Donahue tells us. "I thought it was ugly, as opposed to the first time I saw a Strat, which I thought looked fantastic.

"So, with the Fret-King, I wanted to change the upper shoulder so it curves into the treble horn and makes the base of the body more rounded, like a 'proper' guitar."

The tidy, black-bound top edge hides the joint of the thin ash veneer top over the mainly alder, centre-jointed two-piece body, which sports a natural gloss finish. The neck and fingerboard are satin.

The JD's neck profile has also been specifically designed. "The first time I picked up a friend's Stratocaster - a late 956 Mary Kaye-style Strat - I really liked the neck. I usually don't like 'V'-shaped necks, but what I like about this Fret-King profile is that it's a very subtle 'V'; it gives you the extra mass front to back, which is very important, but the edges are really nicely rounded."

Donahue is no fan of flatter radius fingerboards either, bucking contemporary trend with a vintage Fender-style radius of 184mm (7.25-inches).

Bearing in mind the JD is half the price of the previous Peavey Omniac, we're reminded just how good Fret-King guitars can be. The fretwork, set-up and overall fit and finish is superb; as are the details such as the five-screw neck joint (an added foot to the neck sits under the neck pickup allowing a smaller heel) and quality Wilkinson hardware with custom shop features, including three carefully intonated brass saddles and an inset circular metal jack plate.

But it's Donahue's switching system - which builds on the electrics employed on his previous Fender and Peavey signatures - that makes the JD unique.

In reality it reflects a lifetime's sonic tweakery. Donahue's earliest mod, having been turned on to the Telecaster from the Strat because of its bridge pickup tone, was to install a Strat-style neck pickup. "It matched so well with the Tele's bridge pickup in terms of output and EQ," Donahue remembers.

Both pickups are custom- designed by Trevor Wilkinson. "In this instance we switched to classic 4.8mm-diameter magnet slugs - we normally use 5mm," Wilkinson tells us. "The two centre slugs are slightly raised on the bridge pickup, but they're all flat on the neck. Then they're wound to a resistance reading with plain enamel-coated copper wire.

"We think that 7.1k ohms is what Jerry really likes for the bridge pickup; the neck pickup, however, is a very low wind - just 4.7k. At the moment we're using Alnico II magnets for both pickups in the guitar."

So while the five-way lever switch has the expected neck pickup in position one, both-on in position three and bridge-only in position five, positions four and two needed filling.

Donahue felt that position two on his previous signatures (neck pickup with a little treble roll off) was a little too subtle, "but now we've added this other capacitor, which does suggest more of a humbucking, full-bodied type of sound: somewhere between a Les Paul and an L5.

"It's very nice for jazz players. But if you put it through an overdrive stompbox you've got an element of that classic Clapton 'woman' tone."

Position four came out of Donahue being given a stock Strat pickup that he loaded into a Tele's neck position. The new pickup was out of phase with the bridge but instead of giving that bass-light honky tone of two pickups being fully out-of-phase, "it actually sounded like a middle and bridge selection on a Strat," says Donahue.

He asked Seymour Duncan to check it. "He said whoever wound the pickup, wound it half way, then inserted a capacitor and then finished winding it."

With Duncan's help Donahue realised he could create a similar, partially reversed phase effect with a regular pickup by switching in a capacitor (and resistor) via a four-pole, five-way lever switch. "When we knew what was possible, we played around with capacitor values."

From the off there's a noticeable enhancement in overall sustain next to our comparison '69 Tele, American Standard Tele and Road Worn Strat. It gives the JD a more modern tonality, certainly on the bridge pickup.

Yet as we flick through the sounds, Donahue's tonal aims and descriptions all match what we're hearing. Instead of the muted front-end of a classic Tele neck pickup we get the sparkle and punch of a Strat's neck voice.

Position two definitely sounds more humbucker-like, the pickup mix (position three) just has a wide sparkle to it giving a great soulful rhythm tone, while position four sounds, as Donahue describes, like an almost generic bridge/middle Strat mix albeit with a very slight out-of-phase nasalness. Clean or crunchy, if you know your Strat and Tele tones you'll take to this easily.

Lastly, position four does make for a jazzy through to smooth-edged, but not too dark, blues and rock lead voice.

On the downside, the volume control hasn't got the smoothest taper we've seen, although the tone control feels better and is useful for just toning down the bridge pickup's highs and emphasising a bit of an old Tele's characterful bark.

Playability is superb - the satin neck and fingerboard feel is excellent and we experienced no upper-fret choking.

If the JD is representative of Fret-King's direction with its new Black Label range, then we're in for a treat. The combination of the vast playing and designing experience of Jerry Donahue and Trevor Wilkinson has produced a stunningly good, musical, versatile guitar that should primarily appeal to any fans of the Fender camp.

Indeed, even if you own and Strat and Tele, this JD's hybrid Strat/Tele voicing, with a little bit of humbucker thrown in, could easily become your go-to gigging guitar.

And overall build and playability, not to mention the custom sounds onboard, make the JD punch well above its weight in terms of price. It looks like Fret-King is really aiming for the stars…