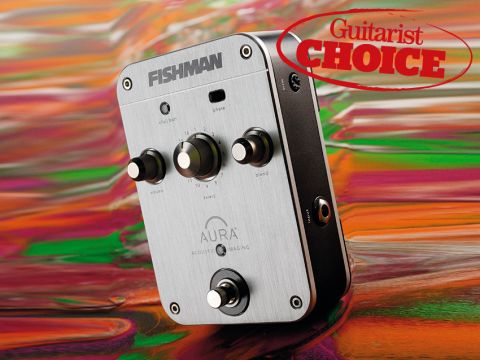 If you want to enhance your live acoustic sound, try this. It could be handy in the studio too.

Fishman's Aura 16 is the latest in what is now quite a long line of Aura products. Fishman's first foray into the world of acoustic 'sound imaging' resulted in the 2004 launch of the initial Aura floor pedal unit.

The technology, designed in conjunction with Akai Professional, isn't modelling as used, for example, by Roland or Line 6 in their VG and Variax products, but instead is more instrument specific. You can't turn your six-string dreadnought into a 12-string, for example, but thanks to Fishman's now extensive online Image Gallery you should be able to find a recorded image of a quality instrument that can be blended with the undersaddle pickup tone to produce a highly realistic 'mic'd acoustic' sound (without the potential hassle of using an actual mic) direct to your acoustic amp, recording device or PA.

Here are some audio examples:

In brief, the Aura 16 allows you to load 16 images, which should be enough to suit a variety of guitars for a live gig. It's a fairly standard-sized pedal unit that feels very robust with brushed aluminium top and bottom plates and black-coated metal sides.

Along with simple inputs and outputs, the DC power input and a small trim control are placed on the sides. Strangely placed on the base of the unit - which proved to be really inconvenient in use - is the camera-like port that enables you to connect the unit to your computer via the supplied USB cable.

And so long as you have the correct PC or Mac OS, you can access Fishman's Image Gallery, an iTunes-like resource that features over 800 different free-to-download images and is being constantly updated as Fishman records and digitises more instruments.

The Aura 16 comes supplied with a range of dreadnought images pre-loaded, which give you a good taste of the unit's potential. With a Fishman Prefix Premium blend-equipped Martin DC-16GTE dreadnought as the host guitar, spinning through the images you immediately hear more realism compared to the direct output of the piezo undersaddle pickup.

Installing the Image Gallery software is straightforward (although we'd advise you check that you have the latest version) but it's a shame it only works on a Mac from Leopard onwards. The interface is good, allowing you to search easily through the extensive library. To broaden our test we selected some nylon-string images to load into the Aura 16 - there's less choice and none that specifically matched our Taylor cedar/rosewood NS prototype.

You can audition the images before you choose to download them and we also tried, very successfully, to 'reamp' previously recorded guitars - if Fishman were to make the Image Gallery available as a standalone software programme it would certainly be a powerful tool for the recordist.

Within the Image Gallery you can create and store numerous image banks, such as playlists, and install them into your Aura 16 as you need if your gig or needs change. Our nylon images proved just as successful as the steel dread.

A 'Fishman Nylon Number Nine' recorded with a DPA 4011 sounded very natural, some of the others sounded a little too brittle in the high-end and with some rather unnatural sounding artefacts in the upper mids.

Indeed many of the images, generally, seemed to have this characteristic, especially when compared with a real recording with a quality mic. But this is where you have to take stock. We're listening to a £1000 guitar recorded with £1400 worth of mics 'off tape' and comparing it to a £249 pedal simulating a guitar of unknown value, recorded originally with £2000 worth of microphone!

In reality, Fishman's sound images are very good, but in our tests they certainly benefit, both in a studio environment and live, from some additional EQ'ing to tame down the sometimes brittle edge. Most images also sounded, in our opinion, best when blended in with the guitar's source pickup - more so live than in the studio. They react very well with the instrument's onboard EQ too so it's easy to shade the images to the specific colour you require.

Fishman's Aura technology has always provided us with a future glimpse. We download our music, so why not the sounds we want to hear, partially at least, from our instruments? And that's the great thing about Aura, it enhances the quality of your sound - it doesn't offer you something completely different and alien to the instrument you're playing.

That enhancement is extremely useful live but perhaps even more useful for the recording guitarist who may not have the space or equipment to 'properly' record their instrument. And even if you have got those facilities, using Aura to enhance an already recorded guitar is handy in the extreme.