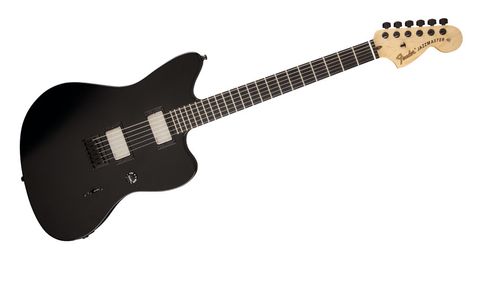 A seriously satisfying playing experience, bolstered by the chunky neck and jumbo frets.

Is any Fender model safe from his scrawl? The partnership has bolstered the Fender line-up with a host of EMG-loaded mahogany rock machines - and Jim's latest squeeze is no exception.

This guitar represents the Jazzmaster template stretched to the very limit. Gone are the soapbar-sized single coils, floating vibrato and alder body, replaced by a pair of active EMG humbuckers, hardtail Strat bridge and hefty hunk of mahogany.

In fact, Jim has spec'd his Jazz to be pretty much identical to his Strat across the board - the only major changes are cosmetic, with a 70s-style headstock, Flat Black matt finish and brushed nickel pickup covers.

Rock guitars don't get much stealthier than this - hell, your only controls are a volume knob and three-way pickup selector, and there aren't even any position markers. It all begs the question: when does a Jazzmaster stop being a Jazzmaster?

The extra weight of the mahogany body balances beautifully with the light satin urethane finish on the modern C-shaped neck, which feels silky smooth to the touch and comfortably fills your hand. Playing is a dream at both ends of the ebony fretboard, thanks to the 305mm (12-inch) to 406mm (16-inch) compound radius, which flattens out for solos at the widdly end, further aided by a small contour on the neck heel.

Although Jim's Jazzmaster plays very differently to your usual Jazz, its tones will be instantly familiar - not to Jazzmaster players, of course, but to anyone who's played an EMG-loaded axe before. After all, EMG's 81 and 60 are the longstanding weapons of choice in the signature models of a certain Mr Hetfield and Mr Hammett.

So, you can expect the same knifepoint-precise rhythm and cutting lead tones that have adorned countless rock and metal records, no matter what you throw at them. A guitar like this demands down-tuning, and with the low E slackened to a gut-punishing A, we were spewing filthy yet defined riffery, aided by the impressive tuning stability afforded by the locking tuners.

There's something slightly unsettling about conjuring such deeply heavy tones from an axe beloved by indie guitarists, but considering the mask-brandishing man behind it, you could argue that's exactly the point.

And although the price tag might seem terrifying, you'll find one for around £1,300 on the street. Now, when can we expect that signature Mustang, Jim?