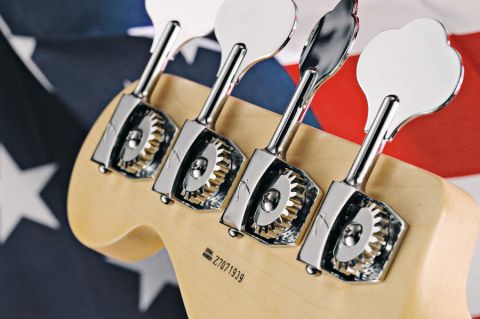 As 'right' as a production line, cost-effective bass can be.

Although originally introduced as the 'two pickup Precision', the Jazz actually proved to be far more significant than that.

When it was first introduced back in 1960 we were presented with the true delight of the 'sweet spot' - the perfect blend of the two pickups - for the very first time. It's something you never forget.

The first version utilised a pair of stacked knobs that offered volume and tone controls for both of the single-coiled pickups.

But it was the later revamped model, with individual volumes and a shared tone, that soon became the accepted standard for this instrument.

It's this second design that has become the footprint for many of the Jazz basses that followed, including this model.

The high standard of satin urethane finish on the neck and gloss headstock is again utilised, although on this review model the fingerboard is made of rosewood.

Having more slender neck dimensions than the Precision, this modern profile gives the neck a substantial quality yet it never feels bulky.

The slinky neck and offset body design has always given the Jazz oodles of visual style and playability and the colours offered here look particularly good on it.

The review colour - charcoal frost metallic - is a case in point. Sharp and clean it gives an old favourite a very contemporary look indeed.

Left-handed (rosewood only) and five-string options are also up for grabs, as well as a fretless option.

A hard-shell case is also included in the price. This Fender/SKB design and are strong, sturdy and quite sumptuous and shaped inside.

It's also fitted with TSA locks approved by the Airport Security Authority in the States, and as they have skeleton keys you can lock your case and should they need to check inside they can.

Bearing in mind some of the electronic advances made over the years, it would have been very easy to play around with the classic circuit and include things like the S1 switching system.

But this is the 'standard' model and Fender has avoided the temptation to over spec the electronics and is sticking with the now-classic circuit.

Playing this bass is like picking up an old friend. With a great setup it's slick and comfortable to play and offers great access to all frets - again with that well played-in feel.

While not offering the constant tone of a Precision, the Jazz provides the greater variety of sounds and with it a certain finesse that only twin pickups can muster.

It's the subtle blending of these two pickups, achieved by using the individual volume controls, that gives the Jazz its own very special voice.

In fact, the tone control really only provides the emphasis to the overall sound rather than being the core element.

This is the bass that brought us the 'sweet spot' - that seductive hidden element that's unleashed when this pickup blending reaches a critical point.

With these upgraded and matched single-coil pickups this blend now sings with a new clarity and forcefulness. It's like you've just found the best version of the bass in the shop.

Individually the pickups speak clearly, but it's the combined hollow tones that count when considering a Jazz.

The upgrades over previous versions are relatively subtle and, aside from the excellent new case, are very much sound-led with new a new bridges and thinner finish.

All in all it's a big thumbs up from us and once again Fender has set the standard other manufacturers can only hope to follow.