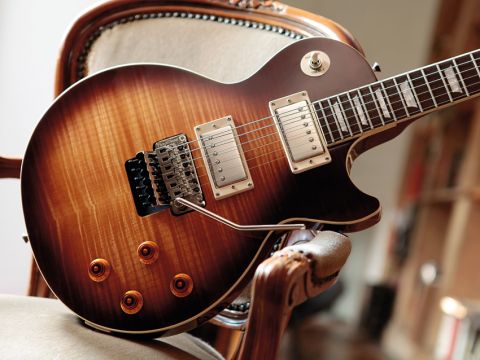 Like a sweet and sour recipe, this classic/modern combo shouldn't work - but it does.

But if we told you this unnatural pairing works effortlessly, would that change your mind? Well, if the classic Les Paul style does it for you and you must have the wiggle-ability of a Floyd, look no further.

Epiphone's range of Les Pauls is almost as broad as its USA parent company, Gibson. Made in China, of course, the price-point is far lower, and it is the ideal place to look for something a little different.

There's little surprise in terms of construction, although Epiphone states the guitar has a maple top on the usual mahogany platform. In fact, after removing the finish in the pickup cavity it appears the guitar's regulation thickness Les Paul body is all-mahogany, the maple 'cap' simply a rather attractive maple veneer that, in its almost faded desertburst finish, is posh but not obscenely so.

Edge binding is tidy to the body's top and fingerboard edges. The 'board looks a little dry, and the big frets have slightly rough tops that sit over the binding, unlike the USA models.

The neck back has a satin finish that works well, adding a less 'plastic' feel and an old-style vibe. The SlimTaper 'D' profile, to our hands, feels like a pretty mainstream, relatively shallow 'C'.

The Floyd Rose Special - along with the Grover tuners and pickup covers - is nickel-plated, again adding to the classic vibe. It's back-routed, the cavity tidily cut with a rubber cushion; upbend is an easy five semitones on the G string and obviously down to slack.

The set-up via Gibson/Epiphone's London tech centre is excellent and tuning stability is pretty good too. Aside from the vibrato, we get coil-splits on both the Alnico II-loaded humbuckers via pull switch on the volume controls - a nice sound-expanding touch.

Initial impressions were less than favourable, especially after plugging the Epi in after our reference and much more expensive USA singlecut. The output seems a little weedy, the tonality lighter and brighter.

But with a few amp adjustments, the Epi comes alive, kicking out a crunchy bridge pickup tone contrasted by a (slightly) under-powered neck pickup that needs a little tone roll-off to get it into flutey LP territory. Both tone controls are well voiced, knocking off that high-end edge, and fully off both produce usable 'woman' tones.

There's plenty of aggression here but, relatively speaking, it sounds surprisingly organic. You can nail some old-style LP voices or conversely pull in the coil-splits for a brighter, more contemporary edge, where the lighter mid-range and 'air' provided by the Floyd work to its advantage.

Both 'buckers verge on the microphonic, so high gain/high volumes can be a struggle, yet the seemingly unmatched pickup/vibrato combination again works in the guitar's favour providing some classic benchmark tones, but with gymnastic vibrato potential.

Yet, even with subtle shimmers, the Floyd works well, lightening the sound and seemingly adding ring and life. And is it just us or does the Floyd suit this Les Paul rather well?

Plenty of players, such as Alex Lifeson and Neil Schon, utilise this singlecut/Floyd combination, though it's one that we have to admit, on paper, seems mismatched.

But in practice it works well. It's helped here by the big, fat all-mahogany body balancing the brightness of the vibrato, and even if divebombing isn't your bag, so long as you can put up with the stringing and tuning idiosyncrasies of the Floyd Rose, it works for older-style vibrato techniques.

Okay, it doesn't match the tonal bulk of Gibson's most famous son, but then it's an awful lot more affordable. In all honesty, it's a bit of a guilty pleasure.