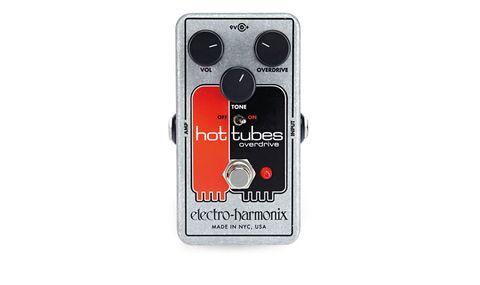 Valve-flavoured overdrive to fatten your tone.

In keeping with the theme behind the likes of the Nano Big Muff Pi, Electro-Harmonix's new Hot Tubes Nano stompbox is based on an old pedal, revived with increased practicality while maintaining the original tone.

This Nano version is about one-quarter the size of the long discontinued Hot Tubes, which launched in 1978 and was one of the larger, flatter EHX pedals.

Not to be confused with the more recent valve-powered version, the original was based around CMOS circuitry with the purpose of emulating a valve amp - circuitry apparently unchanged in the new version - dishing up an overdrive that when set flat (there's a switch to bring the tone circuit into play), adds some warm girth to your sound.

It can be used for a clean boost, with a touch of treble boost if the tone circuit is on - but we liked it as a 'more' pedal in front of a driven amp.

It's great for that little bit of extra sustain, and for coaxing notes into feedback while retaining your tone, or adding extra edge with the tone knob. A no-nonsense overdrive with its own flavour: it's good to have it back.