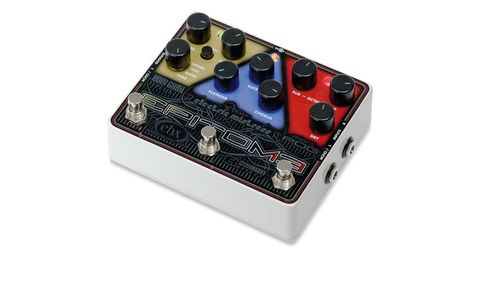 You won't get this range of sounds from any other single pedal.

EHX is no stranger to multi-effects. The Holy Stain and Tone Tattoo have already made their mark, and the Epitome continues that tradition, housing three Electro-Harmonix classics, each with a separate footswitch.

First up is the Micro POG (Polyphonic Octave Generator), which supplies extra notes an octave above and below the played pitch. Controls for the dry sound and the upper and lower octaves let you set the blend.

Next, you get the Stereo Electric Mistress, which can provide both flanger and chorus sounds, and then there's the Holy Grail Plus, which delivers spring, hall and room reverbs as well as flerb (flanged reverb). However, this being an EHX pedal, the Epitome also allows you to combine all three in a unique way, courtesy of its ingenious shimmer switch.

Let's talk about the effects. You're probably already familiar with the Micro POG: it does the business if you fancy making your six-string sound like it has 12 or even 18 strings. A touch of the upper octave does a fair job of mimicking the extra chime of a 12, while the lower octave can add weight to your tone or let you bust out killer guitar/bass unison lines. Both octaves mixed with the dry sound gives you a gargantuan tone when combined with the rest of the Epitome's effects.

If you're a modulation fan, the Stereo Electric Mistress won't disappoint, either. Individual blend controls for flanger and chorus allow you to use both at once, although you might not be able to have your favourite flanger and chorus sound together, due to a shared rate control.

Still, the tones are impressive: the flanger offers sounds from static and metallic through swirly then wobbly to almost ring modulation, while the chorus keeps it simple with a pleasant sparkle.

Finally, there's the Holy Grail Plus reverb, which offers surfy spring twang, a spacious hall and a decent approximation of your bathroom (probably), plus flerb, if you like a wobble on your reverb tail.

The Grail end is also where the Epitome hides its secret weapon: the shimmer switch. This reroutes the Holy Grail before the Electric Mistress in the chain and adds the POG's octaves to the reverb tails only, resulting in oodles of swirly, shimmering ambience.

Perhaps even cooler, when shimmer is engaged, the flerb is swapped for a digital delay. You can have straight delay, but turning up the POG's octave knobs creates repeats that change pitch in ascending or descending octaves - it's not always practical but it sounds ace.

These three effects might not figure in every guitarist's setup, but they're ideal for adding colour. It's when combined, though, that they create something really special - there's a massive palette of deep, spacious, shimmering sound on tap.

To package all three together with the shimmer routing options is an inspired choice by EHX. You won't get this range of sounds from any other single pedal.