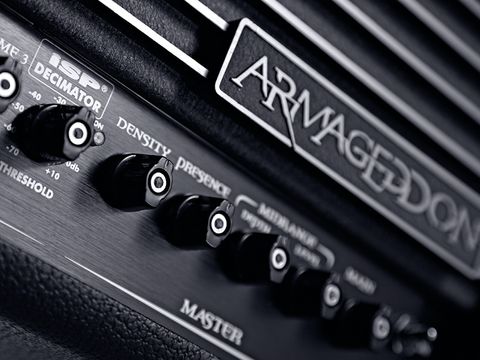 The Armageddon will win lots of three-channel fans - don't pass up a chance to try an awesome amp.

Bruce Egnater's Rebel, Renegade and Tweaker amps have raised the bar for build quality and tone.

Now two fresh heads have made it to the UK, the straight-up rock-oriented Vengeance and the three-channel Armageddon, with extra features focused on the more demanding and specific requirements of heavy metal.

As you'd expect from the name, the Armageddon is a full-sized amp intended to make a lot of noise. It has a smart aluminium front with an LED light bar that illuminates the controls.

The amp features a heavy-duty steel chassis and 120-watt 6L6-powered output stage, fed by a pair of suitably massive transformers. The electronics are typical of the high standard we've come to expect from Egnater, with everything mounted on robust through-plated circuit boards.

There's one main board that holds the front panel controls and preamp valve bases, with smaller ones for the output valves, power supply and rear panel connections. It's common to see multi-pin connectors and ribbon cables for amps like these; however, the Egnater uses neatly bundled individual hook-up wires, improving reliability and making servicing easier.

Care and attention to detail is very evident in the way the amp has been designed and put together; it's built to a very high standard and should handle years of heavy use without any issues.

As you'd expect, the Armageddon's front panel is quite busy, although everything is in line with Egnater's familiar and logical approach. It has three distinct channels dedicated to clean, crunch and lead.

The latter two share bass, mid and treble controls, however, there are separate gain and channel volume controls with separate tight, bright and gain switches for all three channels, providing a lot of versatility from a relatively simple layout.

Talking of control, the Armageddon is also MIDI compatible and in addition to channel changing, you can MIDI switch the reverb, Decimator, master mid-range and effects loop; there's also a handy mute function to prevent any unwanted noise.

The rear panel offers carefully protected mains voltage switching, a switchable effects loop with send and return level controls, plus an XLR connector for the six-button foot controller, along with separate external control jacks. MIDI in and thru sockets and a trio of reverb level controls - one for each channel - are present too.

There's also a pair of speaker outlets with switchable impedance, a speaker-emulated balanced recording output and separate bias controls, test points and HT fuses for both pairs of output valves. Although the Armageddon comes equipped with 6L6s as standard, there's enough bias range to cope with most common pentodes, including 6550s, EL34s and 6V6s.

Canny readers may have already figured out that the bias arrangement also allows you to mix different valves in pairs, so you can combine their sonic flavours to taste.

The Armageddon switches on with very little background noise, indicating the circuits are well sorted. Egnater's trademark clean sound is quickly recognisable, with a shimmering treble, smooth mid-range and tight focused lows that have a satisfying snap to them.

There's plenty of clean headroom on the Armageddon's clean channel, with the second channel taking on more of the crunch function. As you might expect, the third lead channel really pushes gain and overdrive levels to the limit for some seriously good metal tones.

The Decimator noise reduction enhances things by replacing the usual hiss and hum heard in between staccato notes with complete silence and works seamlessly - in fact, we don't notice it until we switch it off.

Meanwhile the clever master mid-range circuit makes it easy to sculpt the Armageddon's response for American or European metal flavours, with plenty of deep end to satisfy seven string users. With 120 watts on tap, both amps are capable of serious volume, especially into their dedicated 4 x 12 enclosures, and easily cope with the cacophony of a live band.

The Armageddon is equipped with an excellent digital reverb circuit that adds space and definition to solo tones and has a clever 'spillover' effect that retains the reverb tail when you change channels. We were extremely impressed with the quality and range of tone it produced.

As with most of Egnater's range, this amp is made in China, but the build and component standard is as good as anything coming out of Europe or the USA and better than some. There is some stiff competition from the traditional leaders in this arena, but for sheer tone Egnaters are hard to beat.

The Armageddon is ideal for players who like to footswitch everything and it will seamlessly integrate with any MIDI-compatible effects unit. Yes it's expensive but you get plenty for your money - we think it's worth it if you need the extra functionality and versatility of three channels.