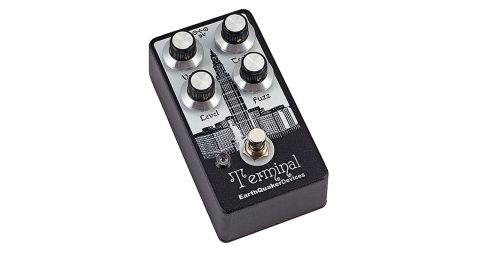 A versatile alternative for anyone yearning for a vintage Shin Ei FY-2.

Besides the bigger names such as Fuzz Face, Tone Bender and the like, the 60s and 70s saw a variety of fuzz pedals being released, many with quite distinctive sounds.

One such was the Shin Ei Companion FY-2 fuzz (available under various brand names) closely associated with The Jesus And Mary Chain and Dan Auerbach.

The Terminal Fuzz is based on that pedal but offers more in the way of control, in that you get separate controls for the output level and fuzz plus a voice knob that changes midrange emphasis, and a treble knob to tweak the top end.

At lower levels of the fuzz knob you get practical drive tones that can be shaped with the tone knobs, but keep turning it up and you'll hear more of the buzzy fuzz that you are buying this for - right through to a ripping synth-like Spirit In The Sky tone.

A specialised tool rather than a generic fuzz - it's got one sound but it's a sought- after sound with distinct character.