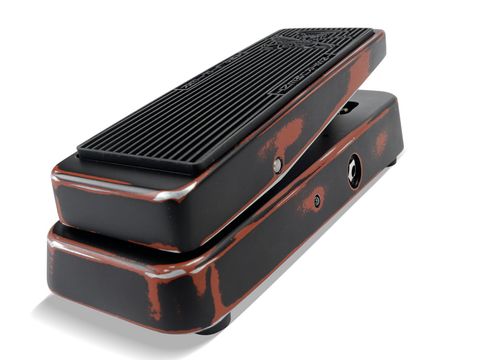 If you use a wah in a rock environment and don't necessarily need to double as a Nile Rodgers-style funk guitarist at weekends, you should give this a try.

When we interviewed him about his gear for his new solo record in issue 355, Slash mentioned an update of the wah pedal that bears his name.

"Dunlop has made a new version that doesn't have the preamp in it and that's what I was using," he recalled. That pedal is this new Slash Cry Baby Classic.

Gone is the superfluous onboard distortion that hardly anyone, least of all Slash, actually really made use of, and the result is a stripped-down wah of a more classic spec.

The faux-worn finish, all rust-coloured undercoat and bare metal, is extremely cool, as is the 'R&F'nR' emblem cut into the non-slip rubber tread that tops the familiar treadle. Importantly there are two bright blue on/off LEDs, one on each side of the chassis, which enable you to spot whether the pedal's actually on from a distance: a touch regular wahsmiths will welcome.

Tuned to a lower frequency, employing a custom-wound inductor, the wah is really able to cut a tonal swathe through a classic, Marshall-driven rock tone. It's ideally suited to colouring notes a la Slash and Michael Schenker and, when turning the guitar volume down to reduce amp gain, the effect loses none of its fatness.