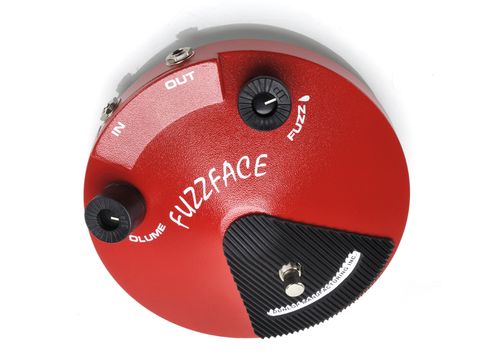 The Fuzz Face remains a classic - but you may want to check out the competition.

Since Arbiter launched the noble Fuzz Face back in 1966, the pedal has been stepped on by the likes of Jimi Hendrix, David Gilmour of Pink Floyd and blues guitarists Philip Sayce and Joe Bonamassa.

If you want a late 60s-style silicon-driven fuzz, find yourself a turquoise Dunlop JHF1 Jimi Hendrix Fuzz Face (£209). Our JDF2 Fuzz Face, meanwhile, is a reissue of the earlier red-faced germanium job.

While some previous Fuzz Face reissues were tonal disaster areas, the JDF2 pumps out an authentic '60s tone, especially if driven with singlecoil pickups. Don't worry, though, humbuckers work great too, pulling a fatter synth-like tone from the Fuzz Face.

We find the pedal sounds best with its fuzz control on full - the secret is to use the volume control on your guitar, dropping it a little drastically alters the Fuzz Face's tone. Incidentally, the Fuzz Face has no provision for a mains adaptor, although many fanatics apparently prefer the sound of a battery-fed fuzz anyway.

It's still the cutest looking fuzz pedal we ever did see, but we can't allow ourselves to be swayed by a pretty face. Classic or not, the JDF2 Fuzz Face is a bit overpriced when compared with the hand-built D*A*M Meathead M-13.

Look around, however, and you'll be able to pick one up for a tad under £100. That should put a smile on your face.