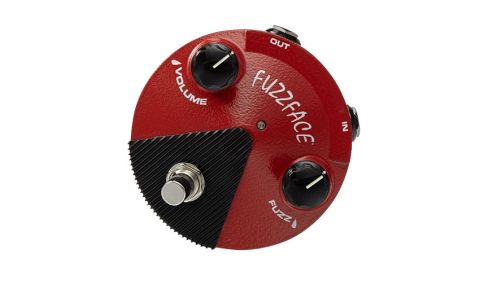 Proves the versatility of the original Fuzz Face design while adding a few modern twists to the recipe.

The Fuzz Face is one of the most iconic pedals of all time, but wouldn't it be great if you could actually fit one on your pedalboard? Fortunately, 2013 is the year the gnarly, nasty fuzz gets cute, with a range of three new Fuzz Face Mini pedals, each with their own quirks. Here we'll be looking at the FFM2 Germanium.

What all three new pedals have in common are modern-day appointments such as AC power jacks, bright-blue status LEDs, easy-access battery doors and true bypass switching. And while the enclosures may be small, they're just as sturdy as ever.

It's in the circuits where the differences present themselves and the red FFM2 Germanium Mini takes its tones from 1966 to '68 era pre-silicon Fuzz Faces, and offers "warm vintage fuzz" via slightly mismatched germanium transistors.

The FFM2 Germanium offers smoother fuzz tones than its silicon transistor siblings, although it can still splutter given a few unison bends. With a neck pickup, it makes for a solid low-gainer, while high-gain bridge pickup tones are sharp and cutting. It's less abrasive than a vintage Fuzz Face, but not as finicky to dial in as the others in the Mini range.

As with all the Minis, it's not ideal in front of an already overdriven amp, so there's a dramatic shift in the last quarter of the gain range, and the same goes for your guitar's volume knob: turning down a couple of notches cleans up the dirtiest of Fuzz Faces because they're so sensitive to what's coming in the input.

It's a worthy twist on a classic and best of all, you can fit one on your pedalboard!