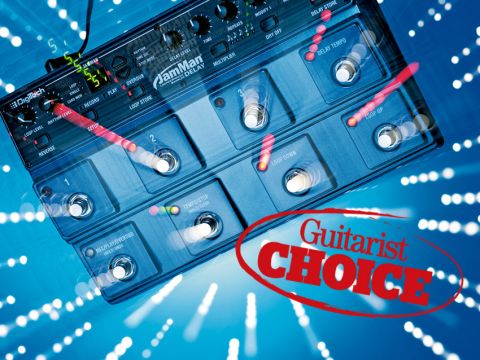 Fully-featured looping and delay nicely integrated together in a single large stompbox.

You get true stereo looping and a fully-programmable stereo delay with loads of control over both effects including synchronising the delays to be exactly in time with loops.

The looper part features 35 minutes of onboard memory plus 99 internal loop memories. Add an SD card to the expansion slot and you'll get an additional 99 loops and over 16 hours of stereo loop storage. As well as this, you get a USB computer connection that allows synchronisation with the JamManager librarian software, which organises and saves your loops.

The delay part offers three programmable preset memories, each with a dedicated footswitch for instant recall. There are eight delay types to choose from, up to 16 seconds of delay time, a tap tempo footswitch plus useful control over various aspects of the delays.

Powered by a supplied 9V AC adapter, the JamMan Delay is an extremely solidly-built beast, featuring two tiers of four footswitches, the upper tier featuring the switches for the three delay presets and tap tempo while the lower tier offers control over the looping functions.

A panel at the top of the unit houses all the knobs and buttons for setting up and editing, as well as a small numerical display. All the connections are on the back panel, including left and right input and outputs for stereo operation, as well as mono in/out and mono in/stereo out.

Whichever delay type you choose there are knobs to set the delay level, the delay time and the number of repeats, as well as two Modify knobs that have a different function for each type of delay, typically adjusting parameters such as tone, drive, modulation and so on.

A multiplier switch lets you change the time pattern repeat rate by a fixed multiple or submultiple of the delay time for dialling in note divisions other than straight quarter notes and there's also a rear panel Tails switch, which determines whether repeats cut directly to silence or are allowed to decay naturally when you bypass the delay effect.

Dry sound can be cut from the output signal via a top panel button - useful when you use the unit in a parallel effects loop or when using reverse delays.

For looping, you get control over the loop level and another knob to set the level of the onboard guide rhythms that are there if you want them to aid timing when recording a loop. There are nine of these, featuring various drum sounds.

You can record a loop completely freely on the fly, setting your own end point or you can use the looper's tap tempo for quantised accurately-timed loop points. Once a loop is recorded you can record as many overdubs on it as you like or simply play along with it.

As a delay unit this JamMan amply covers all the different genres, providing a wide range of effects from crystal clean digital repeats to emulations of older technology - the analogue and tape delays sounding nicely authentic with sympathetic parameters adjustable via the modifier buttons.

Setting up the delay time is simple using the Tap Tempo button or by just tweaking the knobs. There's no display of time in milliseconds or BPM, which might put off some potential users with bands that play to a sequencer or click track and need to dial in the exact tempo, but finding the delay you need is intuitive and easily accomplished.

Taking a cue from a feature that endeared the Line 6 DL4 to many, the JamMan's three different delays on separate footswitches is a practical asset, while adding an expression pedal lets you morph between different delay settings.

The ability to add not only an expression pedal but also an extra footswitch increases hands-free functionality for the looper too - controlling loop playback level with a treadle is very useful - but with the four footswitches providing great control over all the basic functions, there's plenty of practical control without additional hardware.

You'll also find loads of flexibility in how the loops behave. Three modes (Stop, Finish and Fade) determine how they stop, there's reverse loop playback and you can have continuous loops or one-shot single plays.

A time stretching facility can slow down or speed up loops without changing pitch. This is great if you want to use the unit for phrase training, perhaps loading a track via the JamManager software, which is a welcome utility for transferring your loops from your JamMan Delay (or other JamMan model) to your computer and vice-versa.

Not only can you organise any loops that you've made yourself but you can also use the software's file import facility to take audio files from anywhere on your computer and load them into your JamMan. You can take all your loops, make up a series of playlists putting your loops in a preferred order and dump them all back to the pedal.

This is really great for organising a series of backing tracks if you're doing a solo gig, so you can step through them with the loop up and loop down footswitches.

Individually, the looping and delay functions score highly then, but the icing on the cake is that you can use both together. Delayed sound in your loops adds another dimension to them and you can synchronise the delay and loop tempos by holding the delay tempo footswitch for two seconds and then setting the speed for both with the loop tempo footswitch.

The JamMan Looper is a great performance tool for using both delay and looping live. The three instantly available delay presets combined with tap tempo make it one of the most practical delay pedals available for gigging and the looping controls are optimised for onstage use.

Separately, both offer a lot of versatility, but get them synchronised and you can create some great textures by recording delayed guitar into the loop. Factor in the possibilities that the pedal offers for practising, phrase training and composition, and you have a facility that we're sure that most guitarists would be very happy to own.