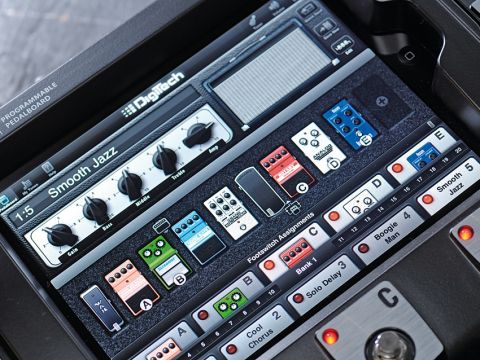 A state-of-the-art multi-FX floorpedal with the easiest editing ever, but you'll be needing an iPad. Then again, this might just give you the excuse you need to buy one…

It enables you to drag onscreen icons around more quickly and easily than you can with the mouse-driven computer-based editing software available for certain hardware multi-FX units. And it's certainly faster than manipulating old-school physical controls.

This seems to have occurred to some bright spark in DigiTech's R&D department, as the company has introduced the iPB-10, a hardware multi-FX pedal that's not only controlled by an iPad, but also has a dock to hold it firmly in place as an integral part of the system for onstage, home or studio use.

The digital signal processing, consisting of two processors, is part of the hardware iPB-10 floor unit, while the iPad acts as a controller for it, utilising a free downloadable app, iPB-Nexus.

With Nexus you can design your own rig: a pedalboard consisting of up to 10 different pedals in any order, plus amp and cabinet if you want them - all selected from a choice of 87 different pedals, 54 amps and 26 cabinets. The iPB-10 has the capacity to store 100 of these pedalboards (20 banks of five presets) all recallable by footswitch and easily edited simply by swiping your finger across the iPad.

Equipped for plenty of usage scenarios, the iPB-10 has connections for a guitar amp, stereo headphones and also a stereo XLR connection to a mixer or PA.

Send and return jacks are provided both for an external stompbox chain and an external amp (the signal going to the amp's input and returning via its FX send). The provision of a USB socket also allows the unit to operate as a two-in two-out interface for computer recording.

The solidly built iPB-10 works with both iPad and iPad 2 - all you have to do is connect the device's 30-pin port to the iPB-10's flexibly mounted plug, sit it in the dock and lower the frame.

This instantly locks it securely in place, looking for all the world like it was always an integral part of the pedalboard. There's a treadle for controlling volume, wah or another assigned effect and 10 businesslike footswitches in two stepped rows of five.

The lower row selects the patches in the active bank while the upper row provides user-assigned switching for five of the pedals in the patch. In addition there are bank up and bank down footswitches, plus another pair (stomp and amp) to access the two external effects loops.

Editing is simple and can be carried out on the iPad in isolation, or when it is installed in the iPB-10. Several menus and pages can be brought up with a single finger tap and parameters can be edited simply by swiping a finger along the touchscreen.

The default display has graphics of the five footswitchable pedals plus the amp and cab visible with instant access to the virtual knobs, but you can quickly access another page for any other pedals in the chain.
A double tap on any pedal enlarges it for easier knob tweaking and changing one pedal for a different one of the same type is dead easy.

A tap on your compressor, for instance, brings up graphics of the three different compressor models available, and a further tap on any one of these substitutes it for the original.

Another page shows the whole signal chain and here you can assign pedals to footswitches, add and delete pedals and change their order in the chain as well as the position of the internal amp/cab (or external amp if connected) and the external stompbox loop.

A 'My Tones' library available on the iPad enables you to store and organise an unlimited number of presets for loading into the onboard memories in the physical unit.

The 100 factory presets offer a great introduction to the unit, covering loads of styles and the signature tones of well-known players - overall, these sounds are excellent. The individual models represent loads of classics in both the amp and stompbox worlds, plus there's some cool Lexicon reverb to add ambience.

With 10 effects in each patch, plus amp sim and perhaps external gear, there ought to be scope for unlimited sonic creativity. However, for the 10 effects you're limited to two modulation effects and one each of wah, compression, distortion, delay, reverb, EQ, noise gate and volume.

A missed opportunity, perhaps, in something so 'now', but software is not set in stone and a future upgrade will hopefully allow you to, say, stack several distortions or have chorus, phaser and Whammy (DSP limit permitting) in a single preset. Nevertheless there's still plenty here to take care of a myriad of recording sessions and gigs.

The iPB-10 switching system offers great flexibility for onstage use. You could use it like a conventional pedalboard with five pedals, each preset giving you a different set of pedals, or you could switch between presets for composite sounds of up to 10 active pedals, with the option of being able to bring five of the components in and out at will.

We'd like to see a mode where all 10 footswitches could be assigned to the 10 possible effects in a preset, but DigiTech tells us that there are no plans to implement that at present.

OK, it all works brilliantly, but perhaps you're wary of taking an iPad to a gig and using it onstage? Not to worry, you can use the iPB-10 without the iPad inserted.

You'll have no screen of course, and thus no quick editing, but if you've set it all up in advance and know which numbered preset is which and what effects you've assigned to the pedals, then you'll be sorted.

The iPB-10 is a clever concept that has translated into a very practical piece of gear, provided that you have an iPad that you can slip into it. Certainly, setting up and rearranging a complete pedal rig has never been easier - a poke here and a stroke there on the excellent graphic interface gets it all sorted with an absolute minimum of fuss.

The only thing that lets it down is the limitation in the number of effects you can use from each category - there'd be loads more flexibility if DigiTech could sort that one out in an app upgrade.

The asking price for the iPB-10 is roughly comparable with similar sized multi-FX pedals (including DigiTech's own RP1000), but then those are self-contained - you don't have to pay an extra £400 for the display and editing facilities. Looking at it that way, the whole package seems rather expensive.

However, an iPad is an extremely useful item in its own right and if you already have one anyway, the best part of £500 may not seem that bad for a floor unit that offers such capability.