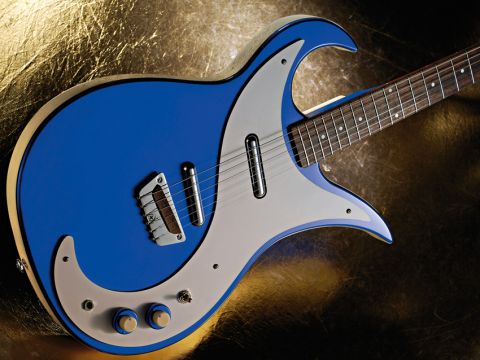 A great neck, cool sounds and a truly eccentric look: what's not to like?

Danelectro is renowned for its Jekyll and Hyde approach to guitar design. For every modest, tasteful single-cutaway effort, there's a contrasting model that's as downright bonkers as any ultra-spiky metal axe.

And we'd wager that this new guitar, the Wild Thing, is among the most radical the company has ever produced. For one thing, the guitar's design was never actually intended to see the light of day…

"The story with the Wild Thing is that originally Danelectro made just one of them, but didn't put that model into production," says Dano's Steve Ridinger.

Apparently this one-off, which was believed to have been made in the mid-'60s, resurfaced in the 1980s and was then nicknamed the Swept Wing.

"The original prototype guitar is now owned by a private collector in the USA and we essentially copied that guitar to create the new Wild Thing model."

The guitar's look is very much in keeping with the vibe of American cars from the '50s and '60s - all points, curves and eye-popping colours; there's clearly something of a psychedelic influence at play though, and the candy apple blue finish is exquisitely garish.

The guts of the guitar are the same as with all modern Danos we've reviewed over recent years. The body is hollow save for a partial T-shaped ply centre block that supports both pickups and the traditional steel bridge.

This same 15-ply material is used for the sides, a frame really that is closed by two 3mm sheets of Masonite (we call it hardboard in the UK) forming the top and back.

A strip of the classic Dano Ostrich-pattern white tape covers the sides along the body's edge, while the expansive scratchplate hides a modestly proportioned control cavity. It's wonderfully low- tech, but all part of the Dano's appeal and its unique sound.

Electronics comprise a pair of Danelectro Lipstick single-coils that are controlled by their own dual-concentric volume and tone pots, and a three-way toggle selector.

The lower, larger disc of the two stacked knobs controls the volume - which can be a little fiddly to grab hold of quickly - but that's just one more aspect that makes this guitar quirky.

The bolt-on neck is smooth and comfortable to play and the three-a-side 'Coke bottle' headstock ensures efficient string pull over the aluminium nut.

Just spending a quick five minutes with the guitar proves to us that this is a serious instrument - it's well balanced when standing, and holds you close when sitting.

As with all Dano guitars, the three-way toggle's central position selects the two pickups in series, in contrast to, for example, the combined pickup position on a Telecaster that runs the relevant pickups in parallel.

Series wiring runs the output from one pickup into the other, doubling the output, which gives the Wild Thing its fullest voice - something that's a spirited and addictive blend of twang and a surprising level of warm low end.

That aluminium nut plays its part with a patina of metallic zing balanced no doubt by the rosewood saddle (which doesn't provide perfect intonation but is still preferred over more modern types by Dano fans).

Using the bridge pickup with a Fender-y clean tone slathered in reverb gives a taste of pure '60s kitsch; the sound is rounder, yet just as gnarly as Brian Jones's lead lines from the early Stones.

Adding a touch of slapback echo provides a classic rockabilly lead tone that's as authentic with Chet-style fingerpicking as it is with Dick Dale pyrotechnics; winding the wick up still further gives a Telecaster-style mix of woody depth and high-end treble.

The Wild Thing, despite its seemingly out there low-tech vibe, actually produces a widely disparate range of tones from warm jazz to choppy funk - overall, we're impressed.

You're going to have to love the look because this is as Marmite a guitar, visually, as you'll find. Beyond that the sleek neck and tonal versatility are much broader in appeal and while this Wild Thing might not make our heart sing as such, we're still finding it difficult to put down.

There are matching bass and baritone versions available too, equally well-priced at £379. The result is a highly affordable, good-sounding guitar for anything but heavy rock and metal, complete with unique looks.

Let's say it again: everyone should own a Dano. Even if it does look bonkers.