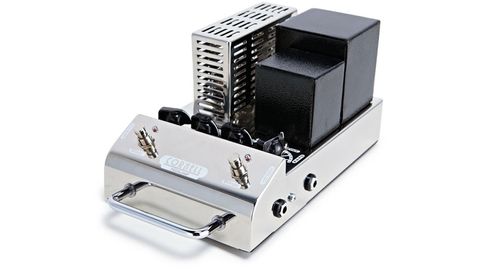 Dennis Cornell's career in guitar electronics stretches back to the far-off days of Dallas Arbiter and the Fuzz Face pedal, among many other designs. Today, Cornell continues to hand-build a select range of effects and amplifiers for customers including Robin Trower, Eric Clapton, Andy Fairweather Low and Wilko Johnson to name just a few.

With the trend for lower wattage amps showing no sign of slowing down, Cornell has recently added another small single-ended product with a difference to its catalogue. It's a pedal and an amp, all in a single box - and what better name to call it than the PedalAmp?

It may look slightly like a scale model of a Magnox nuclear reactor, but the PedalAmp is in fact a self-contained single-ended four-watt amplifier that can plug directly into a speaker cabinet, while also functioning as an overdrive or boost pedal, and a recording or headphone amplifier with a built-in speaker simulator.

Powered directly off the wall mains, the PedalAmp's main structure is a decently thick stainless steel chassis with a folded top and welded corners, which have been neatly rounded and polished. Two black square-shaped cans enclose the mains and output transformers, while a polished steel cage protects the single EL84 output valve and a pair of 12AX7s.

On the rear, there's a mains socket with a large red neon rocker switch, outlets for speakers and headphones, and a useful pair of nine-volt DC outlets for powering other effects devices.

On the front, a steel grab handle doubles as a useful cable tidy. There's a [mixing] 'desk' output on the right near the instrument input jack, with the signal out on the left. The two footswitch LEDs indicate what functions are in use: the boost switch adds a preset gain boost by removing the EQ from the circuit, while the bypass switch provides true bypass, connecting the instrument directly to the output jack.

There isn't much space inside the chassis; the electronics are all supported on one very high-quality printed circuit board, which has been finished with a clear conformal coating - a lacquer that's sprayed or dipped, covering the board and components and protecting against damage from moisture, acids, dust and so on.

This is standard practice for mission-critical components in airliners, satellites and tanks, but on a guitar amp it's possibly unique. We don't know of any other amp builder that goes to these lengths. As you might expect, the components are top quality, and the standard of soldering and wiring is first class.

The PedalAmp is a simple single-channel device with a minimal control layout that won't take long to understand. On top, there are conventional controls for gain, bass and treble, with a pull switch to lower the affected frequency, while a six-way rotary switch governs the output level. Above this is a small toggle switch marked balance, which equalises preamp and output voltages, reducing gain but increasing headroom for a cleaner range of sounds.

Overall, the PedalAmp is typical Cornell, displaying superior artisanship and design, while being built without regard to cost. As far as the electronics are concerned, the PedalAmp is built like a tank, and should be able to stand up to any kind of punishment, night after night.

We tried the PedalAmp out with a variety of guitars, amps and cabinets, including a Les Paul Standard, our regular old Strat with low-to-average output Duncan Alnico Pro pickups, and a Fender Custom Shop Nocaster replica.

Straight away, we were impressed by the PedalAmp's very quiet noise level, which was well within the limits we'd expect for a high-end recording preamp. This is partly down to the PedalAmp's relatively low gain levels - you can drive it into a reasonable distortion for blues and classic rock - and players wanting more grit and distortion might want to use their favourite overdrive pedal.

Pushed hard into a 2x12 open-backed cab that's loaded with Celestion Vintage 30s, the little Cornell retains excellent definition and balance, with a sweet natural compression that lets each note breathe. The PedalAmp's enhanced clarity means its character is difficult to pin down. There's a hint of AC15 in there, but if you juggle the tones with a little care it can also sound quite tweedy.

The PedalAmp can easily drive a good cabinet with sufficient volume for recording, delivering four watts into an eight-ohm load. Whereas most overdrive or preamp devices tend to be near the front of an effects chain, we think the PedalAmp is at its best when used as the final link before the amplifier.

Put an overdrive, compressor and wah in front of it (depending on the product, the PedalAmp could power all three from its auxiliary nine- volt outputs), and you've got a neat self-contained mains- powered board that will deliver top-quality tones into a sound desk while simultaneously sending its own signal to a wedge for onstage monitoring.

The Cornell PedalAmp is one of those Swiss Army knife-type gadgets that can solve so many equipment issues it's likely to become an indispensable part of a modern guitar rig. With the continuing trend away from high volume backline gear and increased use of in-ear monitoring, the PedalAmp could end up being the only amp some players need.

The downside is the price: the PedalAmp is not cheap, but bear in mind that this is a hand-made product from the same person whose amps can be seen on the majority of Eric Clapton's modern concert DVDs. You're buying the best in terms of craftsmanship and sheer quality, and the price actually compares well with the competition.

There are only a few similar products on the market now, but we think this is likely to change. The amp-in-a-pedal concept could turn out to be a very popular one, particularly for professionals, while for many home users a small amp that can power headphones or speakers may also tick many boxes. Something for a future version perhaps?