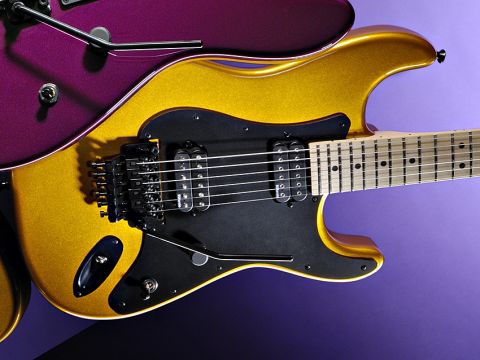 Too offer a guitar with a slight variance in spec is a good move by Charvel. Great neck, cool vibe, and the body is routed for a central single-coil should you wish to go down that route.

We have on several occasions written of the time when a young Edward Van Halen walked into Wayne's repair shop in 1974 and put together an instrument from a Boogie Bodies neck and body upon which he'd go on to virtually reinvent the electric guitar, but it's the feel, the tone and the vibe that was inherent within the vast majority of guitars bearing the distinct logo of Charvel Manufacturing that caught the imagination of so many players.

Check out the So-Cal Style 1 in action in the following video, alongside the San Dimas Style 2:

The new guitars comprise a pair of Strat-types, the San Dimas Style 1 and this So-Cal Style 1, plus the Tele-type San Dimas Style 2. As the original idea behind Charvel was to streamline and modernise Leo Fender's original designs to players' tastes, just how different are these from their obvious influences?

Each neck is the same and offers a 305-406mm (12-16-inch) conical radius and a slight pitch - the angle of the neck in relation to the body and bridge - for a super-smooth action: 1.53 degrees in the case of this So-Cal.

The guitar is loaded with two DiMarzio humbuckers controlled by a three-way toggle switch and a single volume control. Historians tell us that the very first Charvels were loaded with DiMarzio Super Distortion and PAF models, and then with Duncan models later on, which included the first examples of the now classic JB humbucker.

The outrageously over-the-top candy finish is also part of the style and Charvel intends to issue further loud and proud colours on later production runs, which will supersede and replace finishes that have gone before.

In other words, if you love this pagan gold hue, you'll need to move quickly before it disappears back into the vault. It's an interesting ploy and your local Fender or Charvel dealer should be able to give you the precise ins and outs.

The So-Cal has an aggressive voice. The two DiMarzios are each hotter than the Seymour Duncan counterparts used in Charvel's San Dimas models and, with a hefty DC resistance of 17.3k ohms, the bridge Tone Zone gives a wide, punchy and full-on rock rhythm tone.

To our ears it's smoother with more middle than the original's Super Distortion, and winding up the gain simply increases the quality of the sound rather than the level of mush.

Compared to the more glassy tone offered by the Duncan SH-1 in the neck position of both San Dimas guitars, the output of the ceramic magnet, coupled with a more modest general output, gives the neck Evolution a traditionally flavoured sound with which Gibson SG players will be familiar.

The Floyd stays perfectly in tune as long as the strings have been strenuously stretched-in, and the necks play just as nicely in battle as they do when you're idly strumming in front of the television.

If you were a UK-based rock guitar player during the eighties, you would have dreamt of perhaps one day owning an original Charvel. Well, that day has arrived and the only thing that separates these three from an original model from 1978 is the unavoidable march of time.

The hotrod vibe, thanks to the stripped-down look and candy finishes, is front and centre and, as we've said, the necks are truly things of wonder, the feel of which belies what is certainly a modest price tag.

This ticks all the boxes for rock and pop styles, especially all-out wang-bar madness. Go wail!