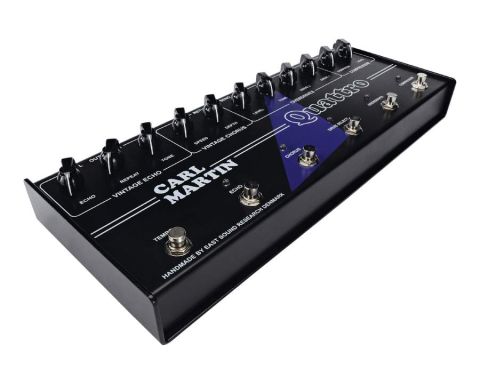 The addition of chorus makes this a tempting purchase. There are no push-button menus, no programmability but also no patch leads. It´s a convenient ready-to-go multi-FX for those of us that love old-style FX and their sound

Carl Martin's first attempt at a non-programmable multi-FX was impressive because of its organic analogue tone.

However, the first version of the Quattro featured a more niche vibrato effect where a mainstream modulation effect such as a chorus might have been a better option. Happily, the MkII model arrives with compression, overdrive, delay and chorus onboard.

The compression circuit has been tweaked to make it less ‘invisible´, but aside from that there are few changes.

The Quattro is housed in a rugged all-in-one metal unit with integral mains adaptor and trailing lead, idiot-proof controls, a tap-tempo switch for the delay and choice of two gain levels for the overdrive.

Along with the single instrument input we get stereo/mono outputs plus a handy FX loop (placed after overdrive but before chorus) to add in one or more additional, primarily drive-based effect.

Not only are the individual effects high quality, they create - in combination - a wonderful organic tone that's noticeably different from many modern multi-FX units. The chorus widens the appeal while the dual overdrives can be used for differing textures and/or gains for rhythm/lead tones.