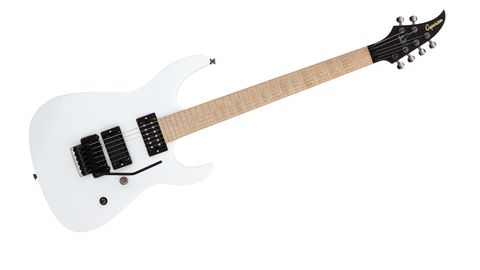 Caparison Guitars was formed almost 20 years ago by former members of the Japanese division of Charvel/Jackson: a company responsible for some of the most iconic rock guitars of the late-80s and -90s. Since then, Caparison has remained true to that heritage and continued its journey as a shred and metal-friendly guitar brand.

In 2011, a UK manufacturer, Caparison Guitar Company, was formed after it acquired the business from its Japanese owners Kyowa Shokai Ltd. The services of chief designer Itaru Kanno were retained and normal service resumed, with each finished guitar still receiving a final seal of approval from Itaru who, according to Caparison's Gabriel Ösztreicher, "personally sets each guitar up and even applies some of the custom finish options himself ".

With its 80s double-cut shred guitar appearance, the M3 MJR is a faithful nod to the production team's past, and indeed the plain unadorned maple neck brings to mind the Jackson Phil Collen signature model, while the black hardware - contrasting the White Gloss body finish - reminds us of Iron Maiden's Adrian Smith's Jackson.

The comparisons end here, though, because the M3 MJR has its own distinct identity and sound, not least with its composite mahogany/maple/mahogany body construction (the composite-tonewood body being a feature of the high-end Caparisons) and that trademark 'devil's tail' headstock.

It's comfortably contoured, as its appearance suggests, but a lot of design attention has clearly been given over to ensuring playability at the higher end of the fretboard: an elegant four-bolt neck joint with smooth recess (similar to the Stephen's Extended Cutaway on Washburns) ensures smooth access to this area.

Caparison's claim that master builder Itaru does the final inspection on each guitar stands up to scrutiny, as the fretwork and overall setup is close to perfection, which is what you would expect from a guitar in this price range.

Somewhat unusually for a solidbody rock guitar, the MJR sounds tonally rich before it's even plugged in, with the snappy maple neck already intimating its sonic character.

The neck itself is simply wonderful: a medium-size 'D' shape with a healthy set of shoulders, that encourages fast movement up and down the neck and Gilmour-esque thumb-over-the-top bends in equal measure.

It comes loaded with DiMarzio pickups, and once the volume is fully engaged they drive the amp with some venom, providing enough saturated gain to handle even the most pronounced shredding styles.

The maple neck ensures a crispness and pleasantly bright quality that just about offers some dynamic responsiveness that is generally lost with high-gain pickups.

However, the sonic trick up this guitar's sleeve lies in the diversity of sounds offered by simply rolling off the volume: with a slight roll-off you can go from saturated shred to sultry rock, with hardly a dip in perceived volume.

80s-influenced rock guitars have seen quite a resurgence of late, and by far one of their most welcome features is the early-edition Floyd Rose, which is present here on the MJR.

To us, it is a far more stable bridge than its more modern slim-line offspring and protects tuning from the severest of whammy abuse. The slightly recessed unit and under-plate cutaway here also provide a platform for some serious upward motion, if required.

If you're in the market for a high-end rock guitar then this should definitely be on your radar. The build quality is first-class, and that stunning neck alone makes the asking price more palatable. These are happy days indeed for the modern shredder.