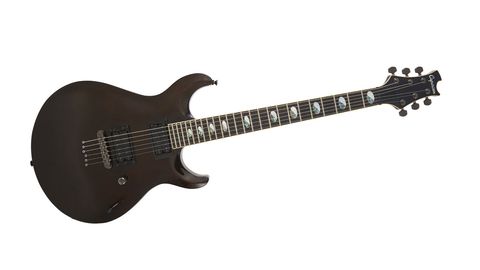 The Angelus's construction and design has proven, in both models reviewed to date, to excel for rock and metal (especially the latter). You can turn the volume and gain up on your amp as much as you like, but sometimes that true metal tone comes from the guitar itself.

Rock players are generally spoiled for choice, but Caparison instruments are made in Japan and designed by Itaru Kanno, a former member of the Charvel/Jackon Japanese division from the late 80s - some true pedigree. The company claims to favour quality over quantity, though that comes at a price.

This extensively re-spec'd Angelus M3B was launched earlier this year and falls in line with Caparison's emergence as contenders at the higher-end of the rock market.

The Angelus range has also been expanded and updated for 2015 and now includes a new 'Custom Line' and a few new colour options. However, it's this M3B that received the most significant changes, including anchoring the strings at the back of the body so they pass through it on their way to the bridge. There's a new five-way pickup selector switch, new neck and headstock binding and a full set of new fingerboard inlays.

Fundamentally, it's the new string- through setup that is the most radical of these changes, which aside from the increased sustain associated with this feature, Caparison adds that it has been "carefully positioned to maximise the tension and stability of the guitar".

That aside, the set-neck design and body shape draw inevitable comparisons with a PRS Custom 24 (in strange coincidence, both Caparison and PRS have a model called the Angelus and have a signature artist called Ace, though not the same one!), but the Cap's maple neck, ebony 'board, jumbo frets, and shorter 629mm (24.75-inch) scale length promise a different feel and tone.

There's also a new Dark Ale finish (which could also be referred to as simply 'brown') that may divide opinion, but the black chrome tuners and tailpiece provide a classy touch, especially when compared with the sometimes cheaper-looking black hardware found on a lot of today's rock and metal guitars.

As its model number suggests, the Angelus also has Caparison's M3 Composite body construction, although unlike the Prominence it has a maple top. It also eschews the appointment of name- brand pickups, again favouring Caparison designed PH-R and PH-F pickups.

These are no mere substitutes, however, and an excitingly tight and aggressive metal tone makes an immediate appearance when plugged into a Mesa Mark IIC profile. A/B'd with a PRS Custom 24, it offers comparatively more output and high-end. No doubt the ebony 'board in conjunction with the central maple block and carved maple top are providing some snap and crispness but, all in all, we have a very rounded tone with an extra bit of bite.

The neck pickup is as warm and powerful as we were hoping for and provides the perfect tonal offset to the bridge pickup. The pickup selector's second and fourth positions show off some spanking funk tones on a cleaner amp setting, which while very usable, probably won't prevent you from quickly switching to the dirt and resuming more metal-inspired activities.

There are many variants of rock and metal guitars throughout the Caparison range, and kudos has to be given to the company or sticking with what it knows best, given the temptation of most brands to cater to guitarists of every conceivable style.

The Caparison pickups, too, were a surprise package and provided a perfect example of why EMGs are not necessarily the sole rulers of the metal kingdom.