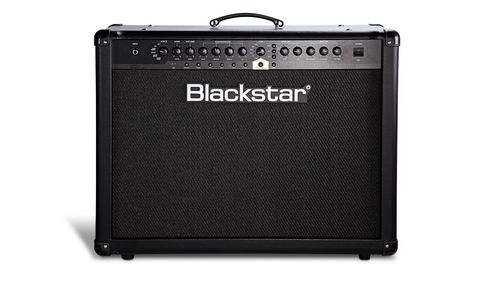 Give the ID Series a spin with an open mind and you might not think you need those hot glass bottles after all...

Since launching in 2007, Blackstar has become a big dog in the world of valve amps, inspiring the likes of Gus G and Richie Sambora to sign up along the way. The ID Series sees the brand swap valves for digital processing and programmability for the first time.

While more and more big-name guitarists are taking Axe-Fx rigs out on the road, at the affordable end of the spectrum we often find that digital modelling lacks balls and immediacy at band volume when compared to the valve-powered equivalent. With the ID Series, Blackstar promises to rip up the rulebook and deliver a performance that packs a punch on stage as well as in the bedroom.

From a distance, this 2x12 ID:260TVP combo looks traditional enough, but closer inspection reveals plenty of action on the front panel. At the preamp end, you dial in a basic tonality with the voice control, with six Blackstar flavours available, ranging from virgin snowfall clean to disgraced television presenter dirty, and many points between.

All sounds are generated in the digital domain using SHARC processing, but when they hit the solid-state power amp, Blackstar's TVP - 'True Valve Power' - can be switched in to simulate the response of six different power valves: EL84, 6V6, EL34, KT66, 6L6 and KT88.

While there are no actual valves inside, rather than using a huge power stage to try to punch in the same weight division as a valve amp, TVP regulates the ID:260's solid-state power amp digitally, cleverly aping the way in which valves interact with loudspeakers.

Rather than a simple change of EQ structure, as you move through the various TVP settings, it affects the speaker damping and voltage across the coil, which impacts on such factors as bottom end resonance, top end presence and the point at which distortion occurs.

Flip the power switch on, and all of Blackstar's painstaking R&D translates into an end product capable of monstrous punch. The core tones sound and (perhaps most importantly) feel closer dynamically to a grown-up valve amp than anything else we've tested that didn't have vacuum tubes under the hood.

And in this 2x12 stereo combo incarnation, there's more than enough volume to compete with loud drummers and give your mate's valve stack a run for its money. Critically, and unlike a big valve amp, the ID:260 delivers plenty of juicy overdrive at neighbour-friendly volumes, too.

Lacking generic labels such as 'Brit Class A' or 'Small Tweed' to help dial in sounds, the learning curve might be steeper than some modelling amps. Yet it shouldn't take even the least valve-savvy long to learn.

Fans of Foo Fighters, Biffy Clyro and indeed modern alt-rockers of almost any stripe will lap up the medium-gain tones on offer, and it's here the ID:260 really sings, capturing plenty of the addictive chime and grind that makes the idea of a 'proper' valve amp so appealing.