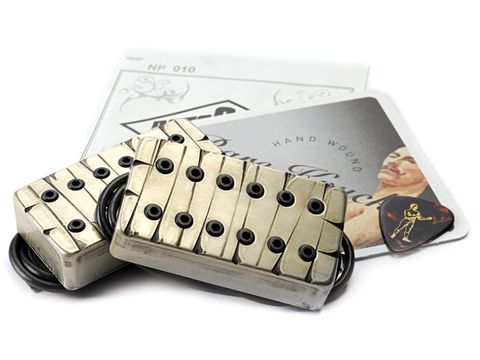 We love the power that's on offer from this set, even when played clean. The Aftermath is the best metal-oriented pickup Bare Knuckle has made to date.

Bare Knuckle is no stranger to the hairy sector of the market, and in the past it's brought us its fair share of aggro-sounding products such as the Nailbomb and Warpig.

The Aftermath lives up to the tradition, too. Not only is it built like a tank, it looks like it could withstand being run over by one. Our review set is clad in Bare Knuckle's new Tygyr finish. We think it's grrreat in an industrial kind of way.

It's designed for aggressive playing styles, so attack is the name of the game here. With the pickups pushed to 10 you'll notice that both the neck and bridge positions offer tons of punch. Play them clean and you'll get a powerful and articulate chug.

The neck position is naturally a bit rounder, but it kicks out a tight low end that doesn't turn soupy. Flick to the bridge and try more gain, and the Aftermath really does come into its own.

Palm-muted and drop-tuned powerchords hit you in the face and then decay with a guttural sneer, and pinched harmonics squeal off your pick.

One big criticism of high output pickups is their lack of dynamics. Here, although there is a certain amount of compression going on to produce that fierce attack, the Aftermath set does a good job of leaving your dynamics pretty much intact.