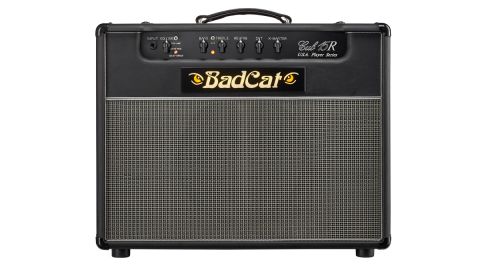 The Cub III's unique tones make it good value for money in our book. Get your claws into one soon.

Good news for those who covet the illuminated Bad Cat badge is that since the beginning of this year, with the introduction of the USA Player series, Bad Cats are slightly more affordable than before.

That's one question we're asking here, as we look at probably the most popular product in the new range, the USA Player Series Cub III 15R combo. It might be an unwieldy name, but the Cub is a nicely proportioned amp, with an immaculately covered birch ply cabinet.

An illuminated Bad Cat logo sits over the grey sparkle grille cloth, lighting up just the cat's eyes on standby and the whole logo in Play mode - most cool!

Inside the Cub's steel chassis, one large high- quality PCB holds all the preamp valves and front-panel controls, together with the chip that powers the Cub's digital reverb. Smaller boards accommodate the output valves and a couple of rear panel components.

The general standard of soldering, layout and component quality is very good: there isn't much in the way of hand wiring, but what there is has been neatly finished.

The Cub 15R is a single-channel design with a couple of neat twists, the first being a footswitchable preamp valve choice, offering either a 12AX7 or the more gained-out EF86. There's a volume control that sets preamp gain, together with controls for bass and treble. A second toggle switch called Fat adds more of a mid boost.

There's a reverb level control, and a Cut control that operates in the same way as on traditional Vox designs, working on the power amplifier and rolling off treble as the knob is turned clockwise. Finally, there's Bad Cat's K-Master control.

The rear panel is where you'll find a pair of speaker outs, an impedance changer switch and a pair of send/return jacks for the Cub's series effects loop.

There's also a footswitch jack for a single-button footswitch to remotely change the Cub's preamp valve. Detail hunters will be interested in a tiny label attached to the Cub's Bad Cat-badged Celestion Vintage 30, which says 'Made in UK'.

While nearly all Celestion loudspeakers are made in China today, Celestion maintains a small production line in Ipswich, building some Alnico drivers, together with other speakers, for a few manufacturers who insist on UK fabrication. Overall, the Cub looks good and is built to last, exuding plenty of high-end boutique mojo.

The Cub powers on smoothly with little electrical hum and hiss; however, on this sample there was slightly more mechanical hum coming from the choke than we'd expect to hear.

Chokes are inductors that often look like small transformers and they filter out ripple from mains AC and usually generate a little mechanical hum. On our sample, for live use, it would never be noticed, but for home or recording some might find it a little intrusive.

This aside, we're very impressed with the Cub's wide tonal range, thanks to the clever dual-valve preamp design. The EF86's drive character is more aggressive and toothsome, while the 12AX7 offers a smoother and more controlled distortion.

The Fat switch adds a sizeable mid boost that more than makes up for the lack of midrange control, and the very clever K-Master control acts as a sort of buffered master volume, allowing the full output whether the preamp is driven or not, bestowing a much wider dynamic range than you'd normally expect from a pair of EL84s.

The Cub's built-in digital reverb is excellent, with a warm smooth decay. The UK-made Vintage 30 loudspeaker sounds different to its more common Chinese equivalent, with a warmer less peaky midrange and detailed treble, despite the new-speaker stiffness that always takes a few hours use to remove.

For country, jazz, blues or classic rock and other in-between genres, the Cub III 15R is a great choice, blending tweed Fender growl with Vox-inspired grind for an impressive range of tones, with a superb reverb.