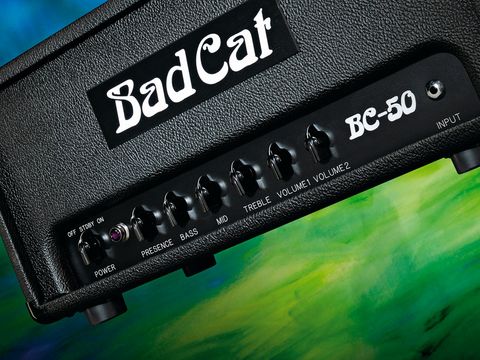 Boutique tone and build quality at mass-produced prices makes the BC-50 practically irresistible.

As the first in what will be a range of products under the banner 'Boutique you can afford', the BC-50 may be stripped down in terms of features but it's still a Bad Cat, which means we expect dazzling tone and build quality. At just over a thousand pounds, it may still appear expensive, but only until you realise that most similar Bad Cat products sell for at least double that figure. So, does the budget Bad Cat cut it?

From the outside, the BC-50 is still up to the sort of standard we expect from James Heidrich and his crew - this is a well-proportioned head, not too big and not too small, which will look fine on any size of speaker cabinet.

The cabinet is constructed from multilayer birch ply and covered in a tough black vinyl featuring a large non-illuminated Bad Cat logo. The steel chassis supports two good-sized transformers and all the valve bases, while inside there's a typically neat wiring job.

The BC-50's electronics are built up on a large and sturdy turret board, which is more associated with British designs than American ones. The turret board is a strip of insulating material with a row of small metal posts or turrets running down the long sides.

It is to these that the resistors, capacitors and diodes are wound around and then soldered into place. While Fender tended to favour the eyelet board, the turret was the traditional British way of wiring a valve circuit and early Vox, Marshall, Hiwatt and others share similar construction.

It's equally robust and has the advantage that components are easier to remove and replace, though it's harder to understand what's going on without a schematic. This style of construction is also a clue to the inspiration for the BC-50's design, which like many Bad Cats pays more than a passing nod to the best classic Brit amps.

In this case it's the Marshall 1959 Super Lead, otherwise best known as the Plexi, which featured two permanently on preamp stages - one voiced very bright and the other fat and warm.

And that's pretty much how the BC-50 works - it's basically a ready-jumpered Plexi, with a single input feeding two very differently voiced preamp channels that have separate volume controls, but share the familiar bass, mid and treble EQ with a presence control governing the output stage brightness.

The last chicken head knob on the front panel is a three-way rotary switch that takes care of the mains and standby switching. The rear panel features a pair of speaker jacks and an impedance changer.

Hear Guitarist's Dave Durban give the BC-50 a workout in combination with Gibson's 2008 Les Paul Standard:

Powered up, the BC-50 is quick and easy to dial in. On an original Plexi, the normal channel was often too plummy and the bright channel would strip the enamel off one's teeth at 100 yards.

Individually, both of the BC-50's preamps are sweeter and much more forgiving, consequently blending them together gives a very wide 'sweet spot'. Practically any guitar plugged into this head sounds superb, irrespective of where the volume or tone controls are set.

As you'd probably expect, the BC-50 sounds like a very well-sorted Plexi, with a powerful mid-range and fast attack, though this amp also delights with a much more complex and detailed treble and a snappy but full bass.

If the BC-50 could be said to be a typically well-engineered and well-executed product that will easily take the stress of pro-level touring in its stride, the same goes for the new Bad Cat Leash attenuator.

This is basically a loudspeaker volume control that sits between the amp and speaker cabinet. A large knob on the front of the Leash's steel box operates a continuously variable rheostat, letting you turn the amp's volume controls up to get the output stage working properly, and then the Leash can be used to control the output level before it reaches the loudspeakers.

Excess energy is dissipated as heat, hence the mains-powered fan. There are also controls to set the impedance and an in-out bypass switch.

With the Bad Cat connected via the Leash attenuator into our test 4 x 12 cab loaded with Celestion G12H-30s, it is easy to get practically any classic seventies rock guitar tone you want - from Kossoff and Clapton to mid-era Zep, to Thin Lizzy and AC/DC.

With no master volume, you just turn the amp up until it begins to distort and then use the Leash to control the volume level. Both channels have a fairly high gain, meaning the BC-50 starts to distort early - at around 10 o'clock on the volume knobs with a regular low-output Strat, and even lower with a PRS McCarty plugged in.

Those players looking for a little more clean headroom could substitute the first preamp valve for a lower gain type - either a 5751 or a 12AY7. However, it's worth pointing out that the BC-50 cleans up very nicely indeed when you back off the guitar's volume control.

The Leash works well too, but sadly our sample's performance was marred by the steel case's tendency to resonate in sympathy with the cooling fan, producing a distracting and intensely annoying drone somewhere around Bb.

We'd pay the extra for some anti-vibration mounts that work and a quieter fan. This easily sorted annoyance apart, the Leash does its job well without changing the amp's tone or dynamic response.

As the curtain-raiser to Bad Cat's 'Boutique you can afford' range, the BC-50 demonstrates that even in these troubled times it's possible to get great tone and superlative build quality without spending crazy money.

Let's keep things in perspective here: this is a Californian, hand-wired, all-valve amp from one of the top names in the business - not a Chinese or Korean-made wannabe. So although it still comes in at over £1,000 it is in real terms excellent value for money.

There's precious little that can provide this kind of quality, let alone at this price. Favouring those players who like to control their tone from the guitar rather than a bank of footswitches, the BC-50 is likely to be in very high demand - our advice is to catch it while you can.