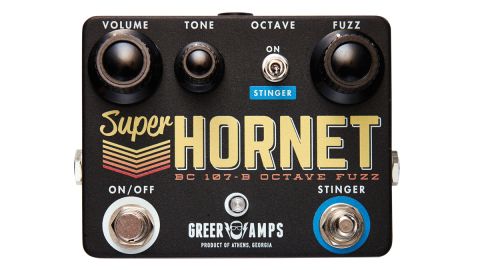 As cool as a fuzz can be.

The Super Hornet is an octave fuzz based on a Foxx Tone Machine from the early 1970s, but with a few tweaks.

As with the original, you can have straight fuzz or fuzz with octave selected via a toggle switch, but the Super Hornet adds a brilliant feature: when the straight fuzz is active, you can temporarily add

in the octave for the odd note or passage via the ‘Stinger’ momentary footswitch. Without the octave added, the sound has a scooped-mid quality to it and goes from overdrive up to full fuzz with crisp clarity - a practical range aided by a Tone knob that can ramp up the upper mids/treble for an aggressive rasp.

If you’re looking for aggression, bring in that octave. It’s not the subtle harmonic enhancement of some octave pedals but instantly louder, layering in an element of high spluttery fuzz - proper nasty, but in a really good way, especially footswitched in for impact.